Irregular Reconnaissance is a collection of mini-reviews on episodic anime (with the occasional movie thrown in).

The spoiler sensitive approach devotes a couple of short paragraphs of observation, complete with a screengrab, to the title in question before settling on a succinct review rating.

The goal is to help you spread your anime radar as wide as possible, with an eye on brand new shows, newly available shows and the occasional classic to keep the mix.

In this issue of the column, you’ll find a mix of successes and of disappointment. We begin by looking at one of Crunchyroll’s big bets for the season, Noblesse, and while it’s not terrible, it’s not amazing either.

I can’t imagine I’m the only person who watched the first episode and wondered what he had missed. The series picks up, with episode 1, after events have happened.

So, here’s what’s going on; in a separate Noblesse section on Crunchyroll there’s an OVA. Watch that first. It’s episode 0.

Once you’ve watched the OVA you’ll pick up the anime quickly; Frankenstein is a handsome schoolmaster and long-lived servant to a supernatural (don’t call him vampire) Noble who has awoken after nearly 900 years of sleep and is in for a culture shock. Thankfully, he’s adopted by feisty and friendly kids.

Unfortunately, some secret organisation is sending their super-soldiers in to investigate the coffin the sleeping Noble had been using. Cue; conflict.

Noblesse is alright, but it seems to be the same story told twice already in just a few episodes. Defeating your enemy is good, but recruiting them is better.

Toradora is a slice of life about two strangely charismatic kids. One looks like a school bully but is actually a softie who cooks, cleans and looks after his few friends. The other is small but scary (a palmtop tiger). Why? She’s working through issues.

I’m surprised at how well Toradora is holding my attention.

Part of it, of course, is that I’m rooting for those two charismatic kids to stop chasing after other boys and girls, and find each other instead.

Another part of it, though, is that the show tackles relatable problems on the sly. The drama is ramped up, high octane (in part because of the big personalities) and then smacks you in the chops with a good point made well.

I enjoyed A Certain Scientific Railgun T, but I think it has quite a lull in the middle as it joins two, or perhaps three, different arcs together.

If you’re a fan of the series, then it’s absolutely worth watching.

The anime is set in a city in which kids are being brought up as psychics by scientists. In the first arc, we deal with one group of scientists trying to meddle in that process.

In the follow on stories, we also deal with scientists and psychically talented but unpleasant groups trying to stick their oar in.

In every case, friendship wins the day. I hope that doesn’t make A Certain Scientific Railgun T sound twee or sentimental, the animation is always spot on, the pacing usually perfect (with some wobbles here) and the action scenes an absolute delight.

Status: Good, but with some wobbles
Where: Crunchyroll

As the ninja-kids are growing up and getting given missions of their own, we follow Boruto and Team 7 into a castle prison to try and get information about a dangerous gang.

There are a few catches that slow down the usually frenetic pace of Boruto: Naruto Next Generations and that’s that Team 7 are undercover and that in the prison people wear collars that restrict their supernatural abilities.

I think this arc is a little disappointing as a result. I get that the change of pace is the quiet before the storm, I get that the writer is introducing some background story by literally having the show’s key characters investigate it.

However, a “little disappointing” does not ruin Boruto and merely drops the rating for the series down to average.

I’m disappointed and struggling with Air Master. I had hoped to watch this golden-oldie and discover some girl power. The show is about a street fighting school girl and her friends.

Most of the time I get dated tropes including the icky “weird guy can pester the girl enough until she finds her willpower crumbling”.

But not all the time. Other times, it’s the Air Master, our towering ex-gymnastic, kicking-ass and taking no prisoners and she sorts things out. Complain as I just did about tropes, I don’t think I’ve once seen the subtitle “for a girl” appear on the scene, and I’ve certainly not seen a bloke rescue a damsel in distress Air Master.

So, if we’re generous to Air Master and call it a score-draw with the girl power, then all we’re left with is a plodding series of encounters that lead up to the same set of high-kicking resolutions.

I’ll watch some more, but my on-going attention may not be a battle Air Master can win.

Status: Below average.
Where: Netflix

Let us know which anime you’ve been watching recently and share your thoughts on what’s to catch and what’s to avoid. 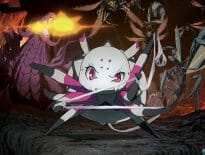 Anime So I’m a Spider, So What? to start January 8… 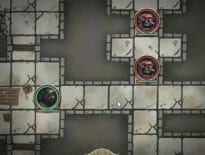