You’ll find a freshly baked batch of spoiler-free mini-reviews of anime fresh from the streaming platforms in Irregular Reconnaissance.

In the 101st column, we look at shows from Netflix, Funimation and Crunchyroll, many of which simulcast as the anime airs in Japan.

If you’re a regular reader of this anime review series, then you’ll know all this. But did you know that you can get our anime scout mascot as merch from the Geek Native store?

That’s right, our scout (currently known as Scout) appears t-shirts, floor pillows and even as a character for your phone cover. You can think of Scout as a badge of honour. If you have her on display, then other anime fans are more likely to recognise you have something in common with them and might say hello. Geek signalling, call it.

Combatants Will Be Dispatched!

I was looking forward to this show based on the premises; secret agents find themselves in a fantasy world. Secret agents from the evil organisation trying to take over the fantasy world, which is even better.

However, Combatants Will be Dispatched! has not opened strongly and feels to be rushing as quickly as possible back to a familiar story of a Gary Sue recruiting sexy warrior women to help him defeat even more evil people.

The show hangs a lantern on some of its unashamedly predictable, perhaps fan-requested, scenes such as overlords in bikini armour, cute princesses and demon girls. That’s a way of dealing with the re-use of situations we’ve all seen countless times before.

There are some rays of hope, though. One character is in a wheelchair, and so far, no big thing has been made about her being in a wheelchair. She’s even a magic healer and, I think, will remain in the wheelchair. I’ll soon find out whether I’ve called that one wrong, though.

Status: Below average.
Where: Funimation

Yasuke is worth your time and won’t demand very much of it at only six episodes long.

The show steadily and quickly ratchets up the drama and power levels but still maintains consistency throughout. Despite the outlandish antics, at no point did I think, “Wait? What?”. I never had to wonder on Earth how even an anime made a jump like that.

I watched Yasuke in English, even though a Japanese language version with English subtitles was available. It was a risk, but it seems to have paid off.

It’s nice to see a would-be hero actually struggle. Here we have a time traveller who doesn’t automatically know what to do.

In fact, so far, the show is getting darker. The whole premise is based on a guy travelling back to his cool school days as a young punk so that he can take a different route in life or force others to do so, and thus save a woman’s life.

Instead, more people are dying.

Also, rather than steer away from a life of crime, Tokyo Revengers shows the punks as honourable people and even as neighbours you would like to have! Rather than avoiding a dodgy lifestyle, the right thing to do so far seems to be to get involved in gang life.

I’m inquisitive about where this show is going.

I can’t know for sure, but I predict that 86 Eighty-Six is spending so much time bringing charismatic young characters to life, making sure that you care about them, is because it’s going to kill them off later.

86 Eighty-Six is full of surprises. The fact that the “drones” of one side aren’t drones at all, but people operated vehicles came out straight away. That was one surprise.

The other surprises are about what’s going on with the other side. Could there even be a supernatural twist? There are no spoilers in this column; that’s pure conjecture on my part.

In my previous update on Magatsu Wahrheit, I wondered how this carefully paced and methodical anime could ever catch up with the dramatic events in the opening scenes.

Now I know. Magatsu Wahrheit puts the pedal to the metal with a spectacular ramp up in action.

Our smugglers suddenly find themselves in an epic struggle. I can now see how the setting can be used for a computer game. Had we been watching the preview to the game’s setting? An origin story of sorts?

I think there are also a few surprises thrown in at the last minute too. I’m rating the show as Average, but it flirts with a higher score, and I’ll watch a season two.

Watched anything awful recently? Watched any amazing shows? Share your tips in the comments below. 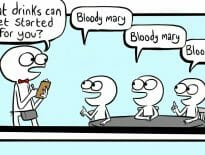 Comics Ordering drinks in a world of the supernatural 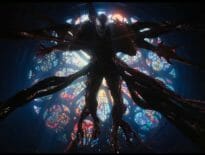