You are here: Home / Games / Tabletop & RPGs / The HeroQuest RPG rebrands as QuestWorlds

Chaosium’s HeroQuest RPG will become QuestWorlds after a transfer of the trademark to Hasbro.

The news comes as Avalon Hill, a Hasbro company, launches a $1,000,000 crowdfunding campaign to create the next generation of HeroQuest. Fans have little over a month to pledge either $100 or $150 in exclusive supporter tiers.

The transfer avoids potentially complicated situations with two competing HeroQuest fantasy products or even legal tussles. Earlier this month, Geek Native talked about the two HeroQuests and how they came to be.

The HeroQuest board game from Milton Bradley came first, beating the RPG by many years. When the trademark was allowed to expire, it was picked up by the RPG publisher.

US trademark ownership documents show Moon Designs/Chaosium still had the trademark on books but Hasbro had secured one on board games.

Now, in a post on Chaosium, we’re told that Moon Design Publications (part of Chaosium) will transfer the trademark and rebrand the RPG.

Moon Design Publications has announced the formal transfer of ownership of the HeroQuest trademark to Hasbro. Moon Design’s HeroQuest tabletop roleplaying game line, published by Chaosium, will be rebranded as “Questworlds”.

QuestWorlds was first announced back in April as the SRD for third party content for the RPG.

What’s next for the HeroQuest RPG?

Chaosium says that the rules will not be changing, but over the next few months, they will rebadge all HeroQuest products.

We are currently selling off existing printed stocks bearing the HeroQuest mark at a discount. Purchase these print releases while you can! Once these books are taken down from sale they will be out-of-print permanently,”

If you want a book that says HeroQuest on the cover and means the RPG, then you have limited time to buy one from the Chaosium store.

Update: 22 Sep 2020: Chaosium’s VP and licensing boss Michael O’Brien is interviewed on EN World about this. He notes the transferal of trademarks happened in July. The QuestWorlds SRD was a planned part of this process.

The HeroQuest RPG rebrands as QuestWorlds

Anime Tonikawa: Over the Moon for You blessed with subti… 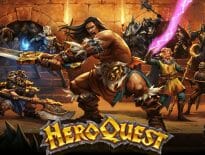