You are here: Home / Geek Stuff / Art / Edward Scissorhands versus… The Thing

Who would win in a fight? The troubled Edward Scissorhands or Ben Grimm from the Fantasty Four?

What’s this you say? We can’t pitch those two together in a bloody duel?

Okay; what about making The Thing (aka Mr Grimm) struggle against our gothic Scissorhanded hero in a titanic battle of ‘Scissors, Paper and Stone’?

Easy. The Thing would win every time. Rock beats scissors! 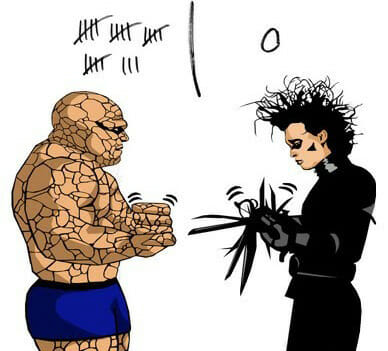 Edward Scissorhands versus… The Thing

Geek Stuff The Doctor Who Venn diagram and the Microsoft/Bing…
💰 Copper Coins 💰 Geek Native is an affiliate and may earn commission on purchases you make from third-party sites.
🍪 Privacy & Cookies 🍪 The site uses cookies to survive. By accessing the site, you agree to use your browser to control cookie use or take 1d4-3 privacy damage (tracking). If you defeat cookies via ad blocking, please consider the Patreon. An intro to cookies, and how to control them, can be found here. I Manage Cookies