You are here: Home / Geek Stuff / The Doctor Who Venn diagram and the Microsoft/Bing connection 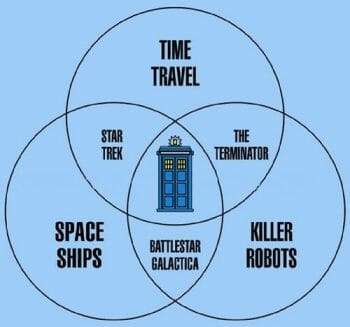 It’s far better than Malcolm in the Middle. This Venn diagram seems to prove that Doctor Who is in the mathematical middle of some serious sci-fi analysis.

That’s right; Venn diagrams have never been so cool (or blue – and this one’s borrowed, it’s newly posted here and yet old elsewhere…).

There’s an extra story here too. I wanted to make sure I gave the blog I found this Doctor Who Venn diagram on full credit – so I searched for it. This week I’m trying to use Bing.com rather than Google.com because Bing’s actually quite good.

I searched for [doctor who venn] and got a rather funky map result. Turns out there’s a place called Venn and Bing seems to think there are three locations for “Doctor Who” matches all in a rather, er, Venn, like arrangement! 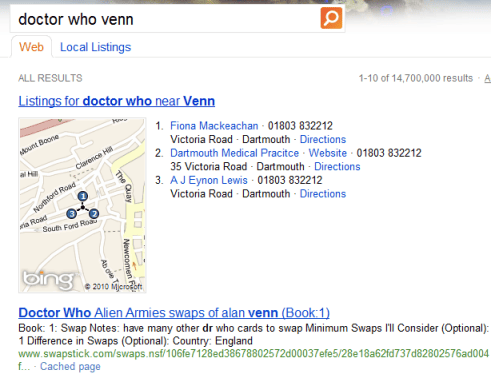 A search for something like [Harry Potter Venn] doesn’t produce the same results. No funky map.

Cool, huh? What do you think is going on?

(By the way; it was Sci-Fi Wire who introduced me to the diagram.)

The Doctor Who Venn diagram and the Microsoft/Bing connection

Art Edward Scissorhands versus… The Thing

Art Aliens are here – beaten up by kids
💰 Copper Coins 💰 Geek Native is an affiliate and may earn commission on purchases you make from third-party sites.
🍪 Privacy & Cookies 🍪 The site uses cookies to survive. By accessing the site, you agree to use your browser to control cookie use or take 1d4-3 privacy damage (tracking). If you defeat cookies via ad blocking, please consider the Patreon. An intro to cookies, and how to control them, can be found here. I Manage Cookies