A new sub-domain on Avalon Hill.com has a 10-day countdown for Hero Quest. The Quest is Calling.

Just this week, it was reported that Hasbro has moved the board game company out from Wizards of the Coast’s remit. In fact, the main avalonhill.com domain still redirects to wizards.com.

The HeroQuest in mention will not be Chaosium’s HeroQuest, and that’s a brand the RPG publisher owns the trademark too. It might not just be a Quest that’s calling, it might be a tussle of lawyers also.

In July, Restoration Games filed the paperwork on a project called HeroQuest Legacies based on the old Games Workshop and Milton Bradley game. This led Geek Native to speculate Is there a HeroQuest board game relaunch coming?.

The presence of Avalon Hill also on the HeroQuest landscape is a twist, but it may still be the Restoration Games project.

The file name of the skeleton on the new HeroQuest countdown timer calls the character “Witch Lord”.

I remember the board game version! I played it once in middle school. 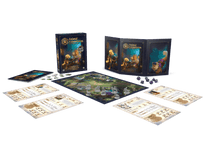