I wasn’t sold by the initial teasers from Red Dead Redemption but I must admit it seems to have stamina. Rockstar seem able to keep on releasing teasers of the same quality. Reviewers and people who’ve had greater access seem to give it thumbs up.

Rockstar will be over the moon. They need to be more than an one trick pony and must have a success beyond GTA.

Here’s the trailer. It’s all over YouTube. I imagine it’s just a matter of time before the full thing appears online too – after all, it’s an ad for the game and Rockstar will want people to get sucked into the world.

I predict we’ll see more of this sort of thing. Games are more like movies (Mass Effect may well make it as a movie) and so games companies have more and more movie-like footage to use. It makes sense to use this quality content to whisk up interest in the game and forge relationships with the entertainment companies.

Here in the UK Play.com still have some copies of the limited game and Game have a great Red Dead Redemption portal page. 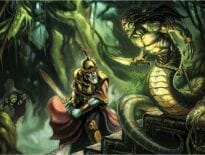 Tabletop & RPGs HELLAS: Princes of the Universe free preview and c…
Music A dancing robot, maNga and Eurovision
wpDiscuzComment Author Info
Manage Cookie Consent
This site uses cookies 🍪, and links are ads that may earn bloggers some money 💰, and with this alert, I very much hope that these dark truths 🧌 are acknowledged.
Manage options Manage services Manage vendors Read more about these purposes
Preferences
{title} {title} {title}