Basic World Building uses the tools from 1981’s Basic Dungeons & Dragons and Expert D&D and reimagined in Old School Essentials to build a starting campaign setting. Even though it is based on Basic D&D, it could be used with other D&D rules or fantasy RPGs.

In last month’s column, I determined that my starting location is Verge Valley located in the Boundary Peaks. The Silver Palace, a dungeon location, is located in the large town of Terminus. Barrier Knights, known for magical fire blades and healing berries and Barrier Captains riding dragons, protect the realm but are rarely encountered. I need to detail the Silver Palace and Terminus. I am starting with Terminus.

I found a free map to use online. I like that it is not overly complicated and that there are twelve locations in the town not counting the castle. I can use a d12 to determine random locations, such as during a chase or to determine where the campaign starts.

The steps to designing a base town include determine size, note services, detail ruler, detail other NPCs, and create rumors. Terminus is a small town of around 1600 people. The River Wandering circles the town before emptying into Dire Bay that connects to the Dread Sea. This makes the town an endpoint for trade traveling downriver.

Twenty years ago, a dragon mounted Barrier Captain named Sir Ellis entered the palace along with the high priest and watch captain. Hours later parts of the palace exploded, and a ruby-red wall of force cut off the castle. Today, surrounding villages are slowly dying or being destroyed by prowling bands of humanoids, corruption has taken the watch, and despair fills the town.

Here are the twelve locations with the palace listed after. Each location lists the percentage chance the watch is on patrol.

1) Castle Ditch. Watch 100%. Barracks for the watch and city guards are based here. Most of the watch are eager for bribes and have given in to corruption, but if the Princess returns, that will quickly change. The Barrier Knights have a small stone fort here, currently empty. The watch captain was lost with the Princess. Lieutenant Keld drinks too much and neglects his duties, so graft and corruption run rampant in the watch.

2) Castle Square. Watch 0% except for fair/tournament then 100%. No fairs have been held in twenty years. Skeletons haunt the field now, fighting mock battles and attacking anyone who strays too close.

3) Castle Street. Watch 25%. A few dwarves live here in their own borough along with several well to do merchants and craftsmen. The dwarves continue to mourn the loss of the Princess and most of their clan, lost in the palace.

The dwarf Delvark knows about the ruby the dwarves gifted the Princess but will not speak to anyone who doesn’t present him with a dozen goblin heads. He also believes the Princess sent some kind of messenger to the elves (actually she sent a wood golem to Scopidae near East Gate Bridge).

4) Church Street. Watch 25%, church guards 100%. The high priest disappeared twenty years ago. Replacements meet untimely ends, so the post is currently open. Low-level clerics and scribes try to administer to the needs of the people.

5) East Gate Bridge. Watch 10%. A vodyanoi sleeps beneath the bridge and sometimes accosts travelers crossing the bridge late at night. Troll statistics can be used.

East of the bridge is the Tower of the Stargazer home to an eccentric wizard named Scopidae. He knows the secret of making wood golems and wants to trade some to the elves of Greengate Street in return for their arcane knowledge. Anyone who wants to be his apprentice and can set this up will be accepted.
When the PCs escort the wood golem to the elves for Scopidae it will recite a message from the Princess for Eddison Leadam of Northgate. Details in next month’s column.

6) Greengate Street. Watch 25%. The few elves that live in town have homes outside the walls. Their leader is Helcen, an accomplished swordswoman and wizard.

7) High Street. Watch 50%. Named for the small hill at its crossroads, this street is filled with taverns, inns, brothels, stables, and blacksmiths. Each caters to sailors docked outside West Gate and boatman and travelers entering from East Gate.

8) Hole in the Wall Street. Watch 50%. Notices for work for hire are posted here on various columns or by criers in small nooks and crannies in the wall. Rumormongers spread gossip. Rat catchers also operate out of here, some raising giant ferrets for use in their work. Gnomes have a borough here and many work here as well while others work maintaining the bridge, piers, and ships. Rumors persist that some gnomes can create golems.

Quentin is a bard with long experience and extensive travel. If anyone tells him about the ruby the dwarves gifted the Princess he tells them what it really is sharing the first two paragraph of information from the Eye of Arik in the module Palace of the Silver Princess.

9) Market Street. Watch 75%. Normal supplies can be purchased here along with weapon and armor smiths. Caravans and ships procure provisions.

10) Northgate Street. Watch (double size patrol) 10%. A black market, smugglers, and the thieves’ guild operate from Northgate Street using the nearby River Wandering to move goods around outside the city walls. A variety of loan operations, brokers, and fences buy and sell legal and illegal goods, especially coins, gems, jewelry, and art objects.

Eddison Leadam lives on the streets and knows them well. His secret is he is a Barrier Captain, and he knows how to get past the ruby wall of force. He is waiting for possible knights to seek him out so he can train them to go in and free the Princess. The ruby wall of force is a bronze golem transformed into a barrier. The presence of a Barrier Captain testing its defenses will cause it to reform and fight him before reforming as a wall. The PCs can sneak by during the conflict.

11) Palace Street. Watch 75%. The wealthy have fortified homes here, many with private guards.

12) Shirehall Street. Watch 10%. Halfling militia 100%. Halfling homes, many of whom work in the local inns and taverns. Halfling herbalists sell barrier leaves that when turned into a broth doubles natural healing for 1d3 days (so 2d3 hit points healed per complete day’s rest).

Hugo Haleberry is a halfling merchant who owns ships and caravans. He has become the de facto ruler with the loss of the Princess. He is also Sheriff of Shirehall Street.

Castle. Serves as the palace of the Silver Princess Argenta. Some type of magical catastrophe has ruined the palace and surrounded it with an impenetrable ruby red wall of force.

Next month details on the Palace of the Silver Princess and the events that lead the player character to attempt to rescue the Princess, perhaps with some becoming Barrier Knights along the way. 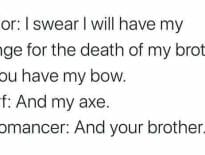 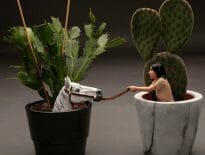