The last time we wrote about board game maker CMON it was pleasant news; they had made XenoShyft a free download to help people stay at home. The time before that it was about CMON and CD Projekt Red working together on a Cyberpunk board game.

You might think things were going well for the company. However, this week Milton Griepp of ICv2 has troubling news. Trading in the publicly listed company has been suspended. They trade in the Hong Kong Stock Exchange.

CMON has failed their audit inspect. In other words, independent third parties hired to make sure no one is cooking the books or wriggling out of taxes, or just to make sure the numbers in the company’s account line up correctly are not convinced everything is right.

There seem to be three non-trivial problems.

First is a $US 1,500,000 deal. What’s that money for? The books say it was a deal with a distributor. The only known deal (and there might be unknown deals) CMON signed in 2019 was with Asmodee NA. If CMON’s finance people are saying this is the Asmodee deal, the auditors have still flagged it as a worry, suggesting they’re not convinced.

The second one is a bit too technical for me. It says; “the rationale and substance of the significant increase in the prepayment balances as at 31 December 2019.” I think that’s saying CMON has been dramatically more generous with prepayments than the auditors feel comfortable with.

Lastly is a spooky and mysterious “going concern”. That rather suggests the auditors are so worried they’ve reservations about the future of CMON. No company ever wants this to appear in their audits so we can only imagine CMON tried everything they could to escape it.

ICv2 also point out that two outside directors quit CMON, including the chairman of the Audit Committee, resigned right after trading in the company was suspended on 1 April 2020. 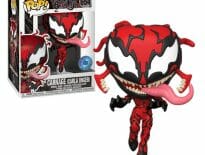