Two weeks ago, many publishers cut ties with the Judges Guild after the owner was discovered to be espousing horribly racist, antisemitism, homophobia, transphobia and bigotry.

The initial wave of publishers distancing themselves from the Judges Guild was quick and dramatic. It wasn’t as if Bob Bledsaw, the Judges Guild owner, tried to argue he had been misrepresented, he stuck by those horrible views, and so it was a straightforward decision for publishers.

There was one significant partner who didn’t leave at the same time. That partner was Goodman Games. They too, though, have hit the eject button and escaped.

It took only a few days to sort out what happens to Judges Guild Deluxe Collector’s Edition Vol. 2, a book Goodman Games was to publish.

The book will still be published, but the Judges Guild will not get a penny.

In their announcement, Goodman Games explains;

In a separate video, Joseph Goodman sits with Judges Guild alumnus Jennell Jaquays, published before this agreement and discussed the unpleasant situation.

Update: Fixed a typo in the first paragraph ‘espousing’ replacing the incorrect ‘exposing’. 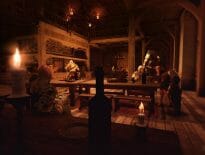