The Judges Guild was one of the first RPG publishers, founded in 1976 by Bob Bledsaw. In the late 70s and early 80s, it was widely considered to be one of the leading voices in Dungeons & Dragons.

The publisher slipped into hiatus in 1985 but returned in 1999 under the ownership of Bob Bledsaw II, Bob’s son.

There’s a more substantial summary over at the publisher’s Wikipedia page and, today, the same article also says;

Founder Bob Bledsaw died of cancer in 2008. The company was inherited by his son, Bob Bledsaw II, a bigot and anti-Semite, who destroyed its reputation.

As with any Wikipedia update, the community may edit it out later, but the amend is recorded in the page history.

Last night, Rob Conley of Bat in the Attic Games announced they could no longer work with the Judges Guild or their intellectual property. In a post on the Bat in the Attic blog, Conley shared several Facebook screengrabs of open and abhorrent sexism, racism, homophobia and other bigotry.

Sunday evening, I called Robert Bledsaw II and discussed the issue. I notified him that I will no longer be doing future Judges’ Guild projects and will only continue to sell what I have currently listed. I stated that I will be calling the other Judges Guild licensee and inform them of the situation and of my decision.

The OSR blog Tenkar’s Tavern re-shared some of those images and readers checked to see whether they were real, or whether it was a hack, or not.

They were confirmed as real. One reader, Mistwell, managed to speak to Bledshaw II before the publisher started to delete and lock down his social media presence. Mistwell shared;

I just exchanged some private messages with him concerning the Jewsmedia comment.

He asked me not to share his text, which I will respect. I will only say yes, he absolutely believes what he said. This does not appear to be some slip of the tongue or poorly chosen phrase by him where he meant something different than what he said.

Frog God / Necromancer Games (Frog acquired Necromancer in 2012) first started working with the Judges Guild since 2002 on a revised edition of City State of the Invincible Overlord. This is a publisher cutting ties with a long time associate.

The Judges Guild ran a City State of the Invincible Overlord Kickstarter six years ago which has had significant problems, even with Frog God volunteering rescue funds.

Backers are still waiting on their books. M.E. Snyder wrote on the comments section;

Honestly, after the news, I don’t even want the ugly book now.

Frankly, I hope Bob 2 chokes on whatever is left of the money. The venomous swine.

Update: An update to this post merges two sentences to make it clear that Frog God Games have had nothing to do with the Overlord Kickstarter except provide some rescue funds.

Live a little, learn a little. I shall be terminating my “pledge” for the now overly long-delayed restart of “The City-State of the Invincible Overlord”, although at this late date, I have about as much chance of seeing my money back as a snowball in hades.

what a joke, absolutly nothing that Bob Bledsaw II said was wrong. as a long time user of his fine products i will continue to reccomend them to any and all, now i will boycott god frog games[as well as any other distributer that cucks ] and encouage others to do so as well.

Everything Bledsaw said was wrong. Do you know what’s unacceptable? It’s racist arseholes like you.

Good luck actually getting any product from him, LOL

Glad I never got in on the KS for the super duper Tegel Manor project. I’m currently playing a fan version in AdnD Unlimited Adventures and now I might have lost my desire to. What in the hell is wrong with people? 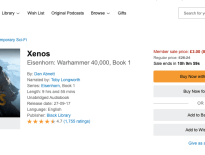 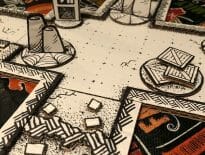 Tabletop & RPGs Tabletop RPG 3D maps: The balance of speed, cost a…
wpDiscuzComment Author Info
Manage Cookie Consent
This site uses cookies 🍪, and links are ads that may earn bloggers some money 💰, and with this alert, I very much hope that these dark truths 🧌 are acknowledged.
Manage options Manage services Manage vendors Read more about these purposes
Preferences
{title} {title} {title}
Loading Comments...