However, there are a stack of other titles to his name including Mekton and Teenagers from Outer Space.

Castle Falkenstein is, technically, Pondsmith’s most critically acclaimed RPG as it took the 1994 Origins Award for the best roleplaying game and the 1995 Nigel D. Findley Memorial Award for Best Role-Playing Product recognitions.

Nothing seems to have happened with Castle Falkenstein for years and then, today, out of the blue, the Babbage’s Engine is a free to download adventure.

You can grab the 25-paged adventure from DriveThruRPG today.

The Duchess is a train which allows travel across the country to take two days, rather than the usual three and is the showpiece of the alliance between France, Bayern and the Austrian-Hungarian Empire.

Shame if something was to go wrong… 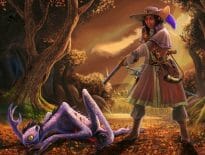