You are here: Home / Games / Tabletop & RPGs / A fighting school shows D&D players how small a 5 by 5 square actually is

Early Dungeons & Dragons had maps in which squares or hexes could range from anywhere between 5 and 10 feet in length.

While D&D 3.0 encouraged the move towards the smaller size, it was D&D 3.5 that made it explicit. The very first page of text (page 4) of the Player’s Handbook, in the introduction, said that while D&D was a game about imagination that it was also a game of three dimensions and the use of a battle map was assumed in all the rules. The D&D 3.5 Dungeon Master’s Guide used a battle grid representing 5 by 5 feet squares.

The use of battle maps is a less prominent feature of D&D 5e although the rise of virtual tabletops like Roll20, Astral and Fantasy Grounds may mean that more gamers are familiar with them. The 5 by 5 rule has stuck.

The chances are pretty high, even if you’ve not been playing for very long, you’ve heard a player question this. Usually, while trying to move through a small area, avoid an attack of opportunity or otherwise be sneaky.

Yes, a 5 by 5 square sounds like a large amount of space. It’s deceptive, though. There’s actually very little room to move around.

HVN is a fighting school for Historical European Martial Arts, founded by Matthys Kool, and growing in popularity.

This year, students at HVN used tape to mark off 5 by 5 grid squares in their practice area. Then, using a range of different weapons and techniques, they demonstrated one on one melee.

Sword fighting demos in a 5 by 5 squares

The halfswording technique murders your range but boosts your precision. Typically, if you found yourself up against a heavily armoured rival and needed to hit the weak spot in their armour, you might consider it.

Dagger fighting demo in 5 by 5 squares

You can see more videos and photographs of the 5 by 5 feet melee squares over at Imgur.

If you’re curious about HVN now, and why wouldn’t you be, you can check them out on Facebook too. 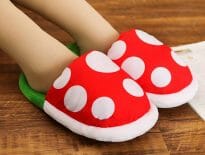 Geek Stuff Feed your feet to the Piranha Plants