Robot 13 first popped onto my radar because of the technology angle. Cleverly, the new comic was making itself available on the iPhone and Android (yes; a robot available on android).

This is a Q&A is with Thomas Hall and Daniel Bradford who are responsible for Robot 13’s success.

Q: Can you walk Geek Native’s readers through who does what on Robot 13? Who writes, draws, has the ideas, helps with the technology, etc?

Daniel – Robot 13 started with a sketch idea that became something of a concept topic between Thomas and I. After bouncing ideas around Tom had enough to begin a pilot issue and took off with it. After the first draft was written he tossed it to me and I began work on sequentials. As far as our individual jobs goes, Thomas writes (which includes all the research that goes with it) and tackles the business end of Blacklist while I handle the all the artwork, letters, logo design, package design, etc.

Thomas – Daniel and I have a pretty unconditional trust going on when it comes to doing books together. We are always open to suggestions from the other, but basically I am free to write whatever I think will make the best script and Daniel is free to interpret that script into visuals how he wants to. We have the same goal- to make the best comic we can. When we work together, it’s kind of a Lennon/McCartney type of thing & I hope that we can continue to have a strong body of work together over time, so when you see our names on something you know it’s going to be awesome.

Q: Where did the idea of Robot 13 come from? What has influenced the comic?

Daniel – The challenge and desire to draw a skeleton robot and to tell it’s story while including big ass monsters.

Thomas – Daniel had this robot design, and we loved it and wanted to do a story where the robot was the main character. We went through concepts- all of which had the robot fighting giant creatures, just because we love giant monsters & we thought it would be awesome. We came to the Greek stuff, though, because Daniel did this print of Robot 13 where he had just killed a Kraken and I loved it and we talked about Clash of the Titans and all those Harryhausen Greek monster films and something just clicked. I went to the library and did some reading and came back with some ideas and we found we had a framework that could make us both happy and would make use of all the good ideas we had to that point. So I guess the initial influence was just us wanting to do a comic about the stuff we loved to write & draw, and the specifics came out of a lot of research and Daniel experimenting with trying to do something new with well-known Greek monsters.

Q: Did you pick a style of illustration to fit the themes and mood of the plot?

Daniel – I guess so. I mean, the style of the book has to fit the story but it’s not like I went through different styles to test drive. The style of the book, much like any artist’s style, reflects what I have been studying at the time but has evolved quite a bit. Even just by going from issue 1 to issue 3 you can see a pretty drastic development in technique just in the way the robot was drawn. The shape of R13 got more skeletal, the line weight got thinner, and the shadows even lightened up a bit to allow for more color effect.

Q: How important is distribution via Android phones and the iPhone series to the comic?

Daniel – If we are able to attract more readers by offering the book in a different format, then it’s vital.

Thomas -Yea, it’s become vital. Right now, there are people who collect issues, there are people who wait for trade collections and there are people who love digital comics. Sometimes, it’s the same fan who wants several versions of the book, but we are finding that some digital comics people never buy traditional comics so we want to make them happy too. And we find that making the book easier to get digitally cuts down of illegal bootlegs. Let be honest- if we don’t release the book digitally, people will do it themselves illegally and “share” it. People have done it with Robot 13, and they even have the balls to talk about it on message boards and basically ask each other who is going to steal from us and put the next issue on line for “free.” While I am all for knowing people want to read out book, I won’t cry for any of those guys when the FBI gets around to catching them & hitting them with the same monster fines and jail time that they go after music and movie bootleggers with. It’s coming, especially since Disney owns Marvel and Marvel books are bootlegged nonstop.

Q: Do you think we’ll ever get to the point where the majority of comics are read on electronic devices than on paper.

Daniel – I really don’t think so. I think we’ll see more people preferring to own both formats, to fill book shelves and to be able to carry dozens of titles in their pocket.

Thomas – No way to know, but I think that some people will always want printed books. There is something about the experience of reading a printed book that appeals to the senses in ways that digital books never will.

Q: What do you think about the state of the industry right now? Are comic books on a high, low or somewhere in between?

Daniel – Definitely somewhere in between. There are books coming out right now that are so incredible and inspiring and others that are absolute rubbish. Do I think there is more rubbish? Probably. But I don’t really refer to books that are poorly drawn or written as bad more than those books that are pumped out because the publisher can or has to or some celebrity is attached to it and that automatically makes it a comic book blockbuster (for the record, Umbrella Academy is one of my absolute favorite books of all time). I find myself more annoyed when a publisher releases some sort of huge crossover event that forces you to buy a title that you have no interest in but is necessary for you to stay on top of the story. But when Joe the Plumber down the street self publishes his comic that he worked his ass off for so he can tell a story he believes in, well that’s FAR more interesting to me. So, long story short, I think this is a great time for the self publishers and small press guys. Especially since so many people are just as willing to read a digital comic.

Thomas – I think it depends on who you talk to and what their expectations are. If you are asking how the industry is doing financially, I think it’s doing slightly better as a whole than some other areas of entertainment because it’s a relatively cheap entertainment. I have heard from a lot of comic shop owners and they say that issue sales and trade sales have kept them open, where things like shirts, figures and other stuff like that used to be the sales leaders in a better economy. On the other hand, many companies are “in it” more for the other stuff than the comics themselves, so anyone who’s economy is dependent on the non-comic stuff will probably tell you that we are struggling. Blacklist has been doing well and Robot 13 has had strong sales for us, so for us the industry is supporting what we are doing & we couldn’t be happier.

Q: Have you been pleased with the fan response to Robot 13?

Daniel – More surprised and humbled. It honestly came out of left field for us.

Thomas – We believed in Robot 13, which is why we invested our own funds and started Blacklist and published the book. That being said, we had NO idea that the book would be so well received. Honestly, we hoped the book would be a nice first thing for us to put out and expected our next book to be better and for each release to be a little better received. I mean, we were being rational about the whole thing… and then the book comes out and people really reacted much more strongly than we could have hoped. Like Daniel said, it was very humbling & it has made us want our next book to be that much better.

Q: Have you had many questions from readers and fans? What do they tend to ask?

Daniel – Not really. We get into quite a few conversations with fans at conventions regarding indie comics and such, but Tom has been more accessible to fan emails than I have been.

Thomas – Aside from story specific questions trying to get us to give away everything, we mostly get people who don’t want us to screw the book up. By that I mean we get questions about Robot 13 being a very well rounded character and get asked stuff like, “Someone isn’t going to “wake up & it was all a dream” or something, right?” And believe me, we aren’t going to do something stupid like that. We have an ending we are working toward, and a lot of the clues are there in the book already but some are not so obvious. The next couple of stories will fill in some more information & it will start to become clear, but we have no intention of cheating and tossing the whole story out.

Q: Which other comic books, writers or artists would you encourage Geek Native readers to go check out?

Daniel – Umbrella Academy, Atomic Robo, BPRD, Hellboy… usually books that are pretty easy to jump into or get caught up fairly quickly.

Thomas – I am currently reading Chew, Atomic Robo & the FrankenCastle stuff, and I would say those three are great. I like stories that aren’t typical and I think a lot of the time you can figure out who’s doing the same old stuff and who is trying something different. I’d rather err on the side of trying a new concept than buy another mega-crossover and be disappointed

Q: What can we expect to see in Robot 13 in the future?

Thomas – Yea, we totally intend to do a crossover with Robot 13, the Twilight vampires and the Smurfs. I think that would capture the whole market! And wouldn’t it rock watching Papa Smurf feed those emo vampires to the Kraken? I doubt even Robot 13 would step in and stop that!

Q: Will readers ever learn the true history of Robot 13?

Thomas – Sure. By the end of it all, you will be able to look back and fit everything together and it will all make perfect sense. Hopefully, the ride itself will be fun & nobody will want it to end, but we are moving toward something satisfying.

An interview with Robot 13’s Thomas Hall and Daniel Bradford 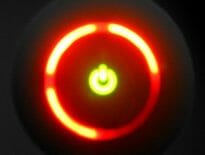