You are here: Home / Games / Tabletop & RPGs / The Most Dangerous Game is converted for the world’s most popular roleplaying game

The Most Dangerous Game is a short story published in 1924 by Richard Connell, it was turned into a film in 1932 and has been adapted numerous times since.

It’s been called the most popular short story ever written in English. As a result, it’s been a popular study in school due to its size, its success, but also the ethical questions it raises.

In the original, a big-game hunter gets washed ashore on an island only to discover he’s not alone. A rival big-game hunter is living there who now takes his pleasure in hunting any survivors from the various shipwrecks that occur in the treacherous seas.

Game designer and certified English instructor S. J. Twining has now brought the two together. A D&D version of The Most Dangerous Game is now available on the DM’s Guild.

The scenario is an introductory island-survival for 1st-4th level characters. It comes with 12 encounter locations, maps of the island and a bestiary of monsters.

The D&D version of The Most Dangerous Game is a little unusual compared to other pre-written adventures in that its’s own pre-generated characters are recommended. The game, which costs $7.99, comes with 10 of these potential survivors.

Geek Native spoke to Twining about the conversion.

Why do you think “The Most Dangerous Game” resonated so well with 1920s audiences?

The 1920s was an era of pulp fiction and a period where there were still dark corners of the earth, that concealed unknown mysteries and forbidding peril. The impenetrable Antarctic, bleak hinterlands and remote islands, and the ruins of lost civilizations all proved fertile terrain for the whimsy of writers in the 1920s. It was entirely plausible to readers that uncharted islands yet existed and, popular at the time, were big-game trophy hunting and far-flung safaris.

And, in an age when silent movies and the new “talkies” were screening in cinemas, short stories and serialized works were extremely popular in periodicals and print publications.

Do you think it is still as relevant today?

The true art of writing short stories involves creating a seamless narrative—an air-tight plotline where disbelief can be suspended for the sake of entertainment. Richard Connell was successful in this approach, crafting a tale where the island and the killer lurking there are inescapable and that inevitability must be confronted.
His expert employment of essential literary techniques, including theme, allusion, imagery, and irony, enhances the narrative, creating suspense and tension, as well as lyrical prose and compelling, metaphorical dialogue. From an educational perspective, “The Most Dangerous Game” presents itself as an ideal text to highlight these devices and to guide a structured analysis of the short story.

Why convert it into a D&D adventure?

“The Most Dangerous Game” has a tense, cinematic style to its pacing, with a setting rich in opportunity for adventure. The island is a menacing and inescapable prison and the villain of the tale shares his pedigree with dastardly archetypes such as the aristocratic Dracula and the diabolical Doctor No. With quicksand traps, Burmese tiger pits, and the taunting pursuit of a madman, the tale seemed destined for adventure.

It’s crucial to play to your strengths when creating adventures for roleplaying games and to avoid working in a genre or encounter-scenario that is over-saturated with designers. The DMsGuild has a wide array of talented creators generating content for Ravenloft, Avernus, and variant bard class-builds, and I felt my work should reflect my own experiences. And, while there is no definitive record of me hunting humans, I have taught “The Most Dangerous Game” to countless students as an English instructor in secondary education. In fact, I read it myself as a student years prior.

Your version of The Most Dangerous Game is set in the Eberron campaign setting. Why pick that over, say, the Forgotten Realms?

While a DM could, with little adaptation, drop The Most Dangerous Game in any campaign setting (off the coast of Chult in Forgotten Realms, for example) Eberron offers unique opportunities to riff on essential story lore and the remarkable setting.

In this instance, the post-war existentialism and moral ambiguity of “The Most Dangerous Game,” written in the shadow of the Great War early in the 20th century, is suitably analogous to the socio-political environment in Khorvaire after the century-long conflict, The Last War. Karrnath was particularly attractive, and the Karrnathi general accused of war crimes in the Dungeons & Dragons adventure shares a great deal in common with the militant Cossack of Connell’s original short story.

Do spells like Detect Evil/Good get in the way of some of the moral debates D&D sessions could otherwise trigger?

I think there is the potential for detection spells to tip the scales in an adventure but in the case of the villain in The Most Dangerous Game, he wears his mantra, “Life is for the strong,” on his sleeve. As with devils in Baldur’s Gate: Descent into Avernus, the villain is lawful evil and his foul intent is clear—regardless of his cordial demeanor.

What will we see next from Wandering Monsters?

My next foray into literary adventure is a new take on the grisly Edgar Allan Poe classic, “The Murders in the Rue Morgue,” again set in the world of Eberron, this time in Sharn, City of Towers. With the arrival of Eberron: Rising from the Last War in November, one can hope to see the noir-intrigue of The Murders in the Rue Morgrave for the DMsGuild shortly thereafter. But don’t expect an orangutan, this is Eberron! 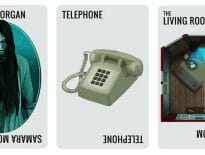 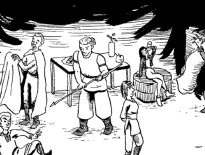