You are here: Home / Books / Comics / The Lover wants to continue Artema’s adventures

In August, guest blogger and comic book author Joshua Saxon compiled the 5 most-funded Kickstarter comics of all time. Then, as I often am, I was reminded of the importance of supporting indie comic book projects on Kickstarter. The Lover, the third in the Artema series, is one good example.

Written by Rachel Cholst and illustrated by Angela Boyle, Artema is cast out from her warrior tribe for breaking a sacred law. Now she’s meeting new people. You can follow the project at its Kickstarter campaign page.

This is a humble campaign. Cholst and Boyle are only asking for $525 and, on day one, they’re well on their way. That’s an atomic fraction of the mega-bucks raised in those 5 most-funded successes.

A pledge of $3 is all that it needs to get a digital copy of the book, or the first comic if you don’t have the first two. $5 is the same deal, a comic of your choice from the series, but in physical form.

It’s $9 to get digital copies all three, but I don’t see a physical bundle option for all three. The one to watch is the $15 signed copy of issue three. There are only 10 available and, within hours, a third have been booked already.

Also of interest is the nod towards Kickstarters union troubles that Cholst and Boyle make. In particular, the team signals support for RPG publisher’s Evil Hat’s petition as a way for backers to encourage the crowdfunding platform to do the right thing. 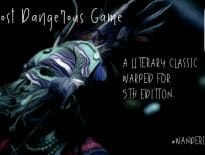 Tabletop & RPGs The Most Dangerous Game is converted for the world…