It’s the 50th episode – the half-century! Is there anything special planned?

Absolutely not. It’s business as usual for Scout and Irregular Reconnaissance.

Business as usual means a collection of anime mini-reviews. Most, but not all, of the anime titles below, are new entrants to the column, and the reviews are for the first few episodes. Subsequent episodes of Irregular Reconnaissance will reveal whether later chapters get any better, get worse or whether the series has matured into a classic.

Two scouts are better than one. What have you seen in the world of anime, new or old, that you think people should watch? Or avoid? Let us know in the comments.

To the Abandoned Sacred Beasts seems to be getting very mixed reviews on Crunchyroll but I think the first three episodes are promising.

Two nations that share a continent go to war over resources. To win one side invents a biological weapon that turns their soldiers into transforming monsters.

There’s a huge problem, though. Over time those troops lose control and become monsters. So, as the war moves to a close, one of the sides takes dramatic steps to deal with the beast warriors.

Episode 1 does more than enough to set the scene and then earn your attention through the next couple of episodes while it re-calibrates. It’s a hard act to follow and, in episodes 2 and 3, it doesn’t quite get there. However, I’m still committed to the show, and I’ll be sorely disappointed if it doesn’t manage to bring that promise to life.

New York gets sealed off as dimensions intersect. That’s the background. Skip ahead to today, and you have got a city where humanity and monsterkind live together, host TV shows together, fight and commit crimes together and generally thrive in a newly chaotic city.

The character we follow is a photographer, an average human, trying to carve out a living in the city when he’s mistaken for someone else and introduced to a secret organisation.

Of course, no spoilers here, but it turns out he’s not quite an average human after all, and that’s recognised straight away by the underground crime-fighting group.

There’s a mix of zany comedy and darkness. Told in any other way and Blood Blockade Battlefront could be dark AF. I’m interested to see how this show progresses, but it has my recommendation so far.

It was back in July and IR: 35 that I watched my first episode of Occultic;Nine.

I used the phrase “a novel mixture of madcap and sinister” (interesting comparisons to Blood Blockade Battlefront in that respect), and I’m sticking to it.

The stories should be horror ones. Mass suicides and Edgar Allan Poe style family madness.

The characters, though, feel like they’re refugees from a comedy. I think the blogger and his whirlwind think-out-loud dialogues is a stark contrast to anything that might stalk in the shadows. I’m yet to see the reason for the assistant with the gigantic breasts. Except, that is, to have enormous breasts in the show.

I just can’t shake the feeling it’ll settle down and become deliciously dark. I’m sticking with it for now.

Status: Sticking with it.
Where: Crunchyroll

Monsters from the otherworld invade our realm but are fought back by magic girls. These are young women who can transform into superhero level warriors.

That’s the background to Magical Girl Spec-Ops Asuka. We’re now in a time of peace, and the magic girls are struggling to fit back into society. Some are trying their hardest to pretend to be normal, not a war hero, while others cling to their old way of life and others even turn criminal.

I’m sure I’ve seen gritty movies about veterans coming back from brutal wars like this. The twist in this anime isn’t just that we’re dealing with young women but that the war, unknown to them, isn’t won. The monsters are about to strike again.

I hadn’t heard of the Japanese computer roleplaying game Granblue before watching this anime, but it’s immediately evident that that’s where the series comes from.

We have got a young woman who needs protecting but has potent magic abilities. The kick-ass female knight who takes it on herself to do that, for some reason, isn’t quite able to hold the spotlight, so we follow some upstart yokel who stumbles into the position.

I’m being harsh, I think. While Granblue is nothing new; building a party, fighting, summoning monsters for bigger fights, it is professionally told, well animated, and an easy watch. 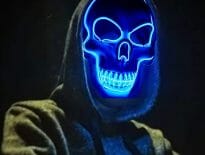