Irregular Reconnaissance is a collection of mini-reviews of various anime shows. These reports might be a catch-up review of a few episodes from a long-running series, or they might be a quick look at a whole show.

The goal is always the same. With each report, we quickly comment on the anime and then to move to a single line status for each. Is the show a recommended watch? Is it one to avoid? Or is it somewhere in between?

Scout reports are better corroborated with other intel, though. Let us know if you disagree or agree with any of the status rankings below and tell us about any anime you’ve recently discovered.

BAKI goes out of the way to overload you with a series of impossible characters, caricatures of manliness and comic book action that you’re soon desensitised.

And then it ramps all of the above up by another notch.

This is an anime in which hugely muscled, and frequently naked men (so you can see their muscles) wrestle, headbutt, eye poke, slice, cut, bite and stomp one another in violent blood sports. And there’s a schoolboy hero.

It’s daft, but if you survive the first few episodes it infects your brain, and you become one of the cult. At least, I did, as I kept watching.

I’ve yet to watch a lousy Fate/ anything anime series.

Fate/Zero gets up to all the usual tricks. We have an exciting cast of characters; those you love to support, those you love to hate. There are mages and heroic spirits who will battle to the death to claim the Grail. Likely you’ll want most of the characters to survive but based on my previous encounters with Fate that seems unlikely.

I’m up to episode 10, and there’s not been that many causalities among the core characters yet. Given that Netflix has two seasons of the show, then this makes sense.

Hold the fort! What’s this? Aggretsuko season two is better than season one! That’s rare and lovely.

We have our cute red panda who, somehow, manages to hold down a 9 to 6 accountancy job in a big firm. Retsuko still toying with the idea that becoming a housewife might save her from this.

There’s a host of new characters introduced, from Retsuko’s mom to those the red panda meets while trying speed dating and while trying to learn to drive. Most notably there’s a new co-worker who has some serious issues and is a walking nightmare, scarily so.

This isn’t a whimsical story, this isn’t a surreal fantasy world. Aggretsuko is you, the people we work with, and it is me. For the most part, this is real life, scenes we can relate to and situations we’ve been in. There’s a twist coming, though, and it’s a good one.

Status: You’ll like it more than season 1!
Where: Netflix

It’s the usual situation. Aliens have ruthlessly invaded Earth, and humanity has responded by creating super-weapons that can only be used by teens to fight back.

We pick up the anime as our hero arrives at the magic school, a place known as Little Garden, and gets immediately into trouble. There’s a girl disguised as a boy who latches onto him and becomes his mentor, but it’s not enough to prevent a showdown with the big-breasted school president/star pupil.

The Hundred becomes a cross between a magic girl harem anime and a mech fighter. The fan service is not outrageous, and the mech/alien action relatively low scale.

It’s undoubtedly watchable, but I can’t find any reason to write home about it.

I thought it time to check back in with Black Clover. I try and watch an episode here and there despite the wealth of new shows available. It’s not enough to keep up with the series, which is fast approaching episode 100.

I think Black Clover gets better with time but not dramatically so. Despite being an action-orientated anime it’s not particularly fast-paced, but that might be because the baddies, the Eye of the Midnight Sun, have potent champions in the form of the Third Eye that are fought one by one.

These last few episodes feel like ‘in-between arc’ style catch-up stories that bring us up to date with goings-on in the Clover Kingdom and re-introduce some of the Magic Knights.

If you didn’t like the first few episodes of Black Clover, then I don’t think this set of events will change your mind. 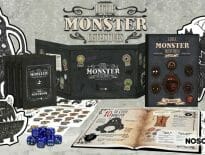