The anime scouts are back for another week of unscheduled and entirely irregular reconnaissance reports.

In this week’s column, we discuss shows that have a shocking start and involve zombies but which become comedies. We deal with the thorny issue of sexy bunny costumes as inappropriate library clothes and think back to the year 2000 era spookfest called Boogiepop.

That’s what the scouts report back with. What’s in your anime reports? Did you try a new show this week only to hit the stop button after an episode or two? If so then your brave scouting can be used by fellow geeks. Let us know the show, why it didn’t work for you and what you would recommend instead.

Something’s not clicking. I feel Cannon Busters should be more enjoyable than it is and I’m beginning to wonder if I’m being far on the show. Am I watching it when I’m too sleepy? Too drunk?

We’ve two robots tracking down their friend, a missing prince, who gets involved with an immortal human called Philly the Kid. The Kid is a rascal, the main robot Sam just wants to be everyone’s friend, and then there’s Casey a junk mechanic bot.

The catch is that Sam’s not really a friend bot. She thinks she is. She’s actually a rare and powerful weapon bot known as a Cannon Buster. I guess I’m still looking for a twist that’s not predictable or a character I’ve not seen before.

Rascal Does Not Dream of Bunny Girl Senpai

I really liked the first few episodes. We have got a guy called Sakuta Azusagawa who sees a beautiful young woman dressed in a sexy bunny suit walking through the school library. Weirdly, all the other guys are ignoring her.

It turns out our bunny girl is an actress on hiatus. People are forgetting about her, and as a result, she’s turning invisible.

“Rascal Does Not Dream of Bunny Girl Senpai” treats “puberty syndrome” as a supernatural problem. It’s well-paced and intelligent, but once we sort out bunny senpai, we return to the theme and cycle through the other female characters, and that’s less engaging.

I enjoyed the original and now nearly 20-year-old Boogiepop Phantom. Needless to say Boogiepop and Others a shot.

The fact that I’ve only found time to watch one episode is not a ringing endorsement. However, the show is now back in the Crunchyroll queue, and I’ll make sure to get to chapter 3 before deciding its fate.

Boogiepop is a supernatural vigilante who may, or may not, be the alter ego of a schoolgirl. The original was quite dark with some scary moments, and episode 1 of Boogiepop and Others looks like it wants to follow in that tone.

I’m enjoying SSSS.Gridman but find myself watching it slowly, and I can’t tell you why.

This is a really well-animated mecha with a twist. Gridman is humanoid mecha seems to be the only defence against Kaiju that appear in a city. Except, after the battle, no one else remembers. No one else can even see the bodies of the defeated Kaiju. The dead are just forgotten about.

If you watch this, as you should, then watch for the pregnant pauses. They’re used often and to significant effect. Also, note how the Kaiju look like animated toys or perhaps those rubber Kaiju of 80s films.

One of the most unexpected opening sequences in recent anime history can be found in this show. It’s a certified way to get your attention.

Then, it gets weirdly mainstream.

The zombies have one new purpose in life: to form an all-girl pop band. Or a metal band. Hey, any music will do just as long as they’re an idol band.

This might have started as a horror anime, but it absolutely isn’t. Zombie Saga becomes a comedy and a musical one. Just make it through that first episode if you’re not into jump scares.

Status: Recommended for comedy and music
Where: Crunchyroll | Funimation

That Time I Got Reincarnated as a Slime

The anime roughly follows the light novel and, I think, is much better. In what’s now a familiar origin story; our hero dies in our world and awakens in a fantasy world. In a twist, he doesn’t awaken as a handsome young man, but as a slime. Slimes are the lowest of all monsters.

The lead character doesn’t stay standard and low powered for long. The hero, slime has a powerful ability that lets him consume the skills of those he defeats. In no time at all he’s broken out of the underground monster cave, he was reincarnated into.

I think there’s a bit for everyone in this anime. There are action and adventure, there’s even a bit of empire building through military action and diplomacy. There’s emotional scenes, friendships and a host of compelling characters. It’s not in-depth and academic, but it’s fun and easy to watch. 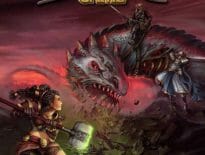