You are here: Home / TV / Anime / A story of growing up and learning to kill people: An Assassination Classroom the Movie: 365 Days’ Time review

Assassination Classroom is the story of a group of failing school kids who are given a chance to earn a bucket of cash if they could just kill their teacher.

It gets weirder than that. The kids’ teacher has a head like a smiling emoticon, is seven feet tall, has a dozen tentacles and is a super-villain who will destroy the world in a year.

I don’t know why I started to watch the anime series, but I did and very quickly found it to be delightful. Koro-Sensei, the yellow death octopus, is lovely. He only wants the best for the kids.

If that synopsis appeals to you then I’m going to recommend the strangest of things; don’t buy the movie. At least, don’t buy it just yet. Assassination Classroom the Movie: 365 Days’ Time is a clip show. It’s a retelling of the whole series through the mechanism of two of the school kids returning to the school where it all happened – after it happened.

Here’s what I think you should do;

I think clip show movies like this only happen when a story is told entirely, but the show has done well enough for the studio to both find the funds to do more and allow the director to return to the title. It’s easy to guess that Assassination Classroom falls into that category.

In some ways, I’m glad the movie doesn’t add any more to the story. I feel the show is finished. It’s done. It’s a show about assassinations. It pretty much defines how final endings can be. However, it was nice to return to the setting, refresh my memory of the series and catch-up with the inner thoughts of the two central school student characters.

Seiji Kishi, director of the show and the movie, does a great job at pulling the highlights out from the series. It’s hard to say whether someone coming in from the cold to the title will see how much of an impact the mutant yellow killer teacher had on the kids concerning helping them improve their lives and outlook and how they began to respect him. Watching the movie having seen the show it all came flooding back to me.

He is also the director on Kengan Ashura, a gladiator anime, streaming on Netflix next year and so perhaps Assassination Classroom the Movie: 365 Days’ Time is also an effective crash course into Seiji Kishi style and a way to decide whether Kengan Ashura might tempt you too.

My copy of Assassination Classroom the Movie: 365 Days’ Time was provided for review. It’s available from Amazon and other retailers in the UK from December 17th.

A story of growing up and learning to kill people: An Assassination Classroom the Movie: 365 Days’ Time review 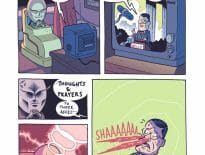 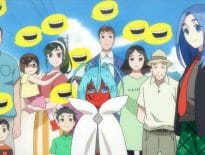