You are here: Home / Games / Tabletop & RPGs / Wizards of the Coast pull a welcome U-turn on Eberron and D&D’s Adventurers League

Wizards of the Coast, the publishers of Dungeons & Dragons seem to have changed their minds on Eberron. The Wayfinder’s Guide to Eberron was announced 23rd of July and in the very introduction to the book, page 4, was the news that Eberron would not be part of the Adventurers League. You can read it in the free to download preview.

Bear in mind: this book presents my current vision of Eberron. This is the world I run at my own table and the way that I’ve converted its ideas to fifth edition. The game mechanics are usable in your campaign, but at this time they aren’t officially part of the game and aren’t permitted in D&D Adventurers League events.

Now, though, Eberron will feature in the Adventurers League after all. A D&D blog post from Chris Lindsay dated 31st July says this;

I’m very pleased to announce that shortly after we begin D&D Adventurers League season 8 featuring Waterdeep: Dragon Heist (and I’m totally STOKED about that campaign as well), we will begin a whole new exploratory campaign featuring Eberron. The foundation for this campaign will be the Wayfinder’s Guide to Eberron. You might ask, “What do I mean by exploratory?” As you can see with the publication of the Wayfinder’s Guide in the Dungeon Master’s Guild, Eberron is a work in progress once more. Rather than fine-tuning this wondrous campaign in a vacuum, we decided to put it out there for you to play with and tell us what YOU want out of Eberron. Think of it like everything else in fifth edition D&D. We want the fans to be able to provide us with feedback to help shape Eberron and the Adventurer’s League campaign that shall accompany it.

This is excellent news for D&D players who want to do both; explore Eberron and progress in the Adventurers League.

Wizards of the Coast were very clear at the Wayfinder’s Guide to Eberron (5e) would change. They called it a living document and said;

… this is a living document, and this content will evolve and be updated in response to feedback.

It looks like they’ve been good to their word and have already made significant changes.

If you want to learn more about the D&D Adventurers League then there’s a stand alone website to explore. 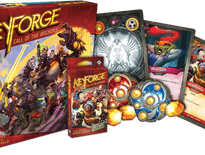 Tabletop & RPGs KeyForge is a new game from Magic: The Gathering&#…