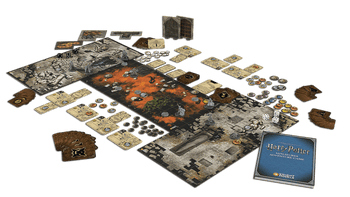 Last month we had news from Knight Models that they had a Harry Potter mini game ready to take to Kickstarter. Today, even the teaser video has been pulled from YouTube.

So, what’s going on?

Five hours ago they updated their Harry Potter FAQ and this says;

Will Harry Potter Miniatures Adventure Game be available in retail?

Yes, we will try to make it possible for 2018’s Christmas. Exclusive miniatures and pre-order offers will not be available to retail.
We will compromise to deliver all the pre-orders before shipping retailers.

Phew. Okay. So we got there.

The reaction to ditching the Kickstarter is mixed. Some fans are happy that the company isn’t making fans jump through hoops for a license and production that is already underway. Others are frustrated at all the chopping and changing. The retail offering has a much smaller geographic footprint than the Kickstarter; English and Spanish only. That’s the United States, United Kingdom, Ireland, Portugal, Andorra and Spain so far.

During the confusion stage of the transition from Kickstarter to Retail it very much looked as if Knight Models only had limited copies of the game available. However, the new FAQ also pushes back on that and states clearly there’s no ‘unit limit’ on the game.

Are their benefits to pre-order? Yes, there’s exclusive miniatures for those who do… although the company might make ‘alternative’ versions of popular characters.