You are here: Home / Games / Tabletop & RPGs / Genre Police: The Mother Of All Punks!

Hi guys, welcome back to genre police. Now we’re done looking at fantasy, we’re going to deal with a different section genre you can smash into you games. That’s right, it’s time to look at the ‘Punk’ genres. In particular, we are gonna start with the originator and how it set a standard for all that went before. We’re gonna clean off the Zeerust and climb into Cyberpunk.

While it’s easy to imagine Cyberpunk was birthed almost overnight with the publishing of Neuromancer, the truth is that the novel series was rooted heavily in a noir detective background. Gibson’s genius was to tie that set of staples to the end result of emergent technologies at the time. This does mean that Cyberpunk has forever carried with it the feeling of the black and white noir world, only lit in neon. So while Cyberpunk has an easily identifiable set of codifiers (mirrorshades, augmented realities, cyberlimbs, digital worlds) it doesn’t mean that these are necessarily the point. Instead, the purest expression of genre is concerned with tales of the underclass battling to keep their individuality and live free in the face of world that increasing cares less and less about them.

Everything in Cyberpunk is geared toward this conflict of individual versus the system. Large faceless corporations. Immortal, callous, machine oligarchs. Gang culture informed by groupthink. Surveillance culture. While the ‘Cyber’ half of the genre is used to identify the types of technology used, it’s the ‘punk’ part that gives the genre its soul. The heroes are those who kick against the system and fight to make their own destiny, be that illegal or in the shadows. This conflict is universal and set the standard for punk genres going forward.

Before I begin these examples, I would point out that most people are going to shout that I have forgotten the game ‘Cyberpunk’. I haven’t. It is the grandaddy. I just think these games represent fresher ways to adapt the genre in new ways.

Shadowrun: If you are thinking of adapting your fantasy game to cyberpunk, you should really take a look at Shadowrun. I’d be surprised if you haven’t heard of it before, but the setting is the perfect mash-up of genres. I would say that the rules are a little dense and granular for some people. Your milage may vary. Having said that, it’s worth checking out for background alone.

Vurt: Newer kid on the block, Vurt is a game and novel series that owes less to 80’s/90’s era technological thinking, which allows it to feel more fresh. It’s also set in the English city of Manchester, which if you all play while butchering the Mancunian accent for hours, would lend a real new feel.

Cryptomancer: Another really interesting game, mentioned because while it has no overt Cyberpunk element, has a kind of ‘internet’ in a fantasy world and follows that idea to it’s logical endpoint with a focused commitment. Something weird and fun to check out, especially if you understand modern data security (I’ve been told).

Turn On, Jack In, Tune Out

So how can we get into the Cyberpunk database, steal what we can and get out without tripping a safety protocal? Let’s look at some ways.

Fight For Individuality: This is a cornerstone of Cyberpunk that goes beyond just ‘Battling with heavy ordinance’. Our heroes are people who stand out and refuse to be anything but themselves. They are iconoclastic people. Give them with hard choices where victory involves screwing over friends and allies. Present them with foes who have many faceless mooks who all have surrendered to groupthink. This is easily adaptable for other games – imagine a D&D world that has an organisation run by Illithids that uses high technology to secure safe passage through the underdark for goods in exchange for brainslave contracts. If you throw in neon underdark lighting and use the Elder brain as a computer, you have a cyberpunk aesthetic. While individual villains should stand out, there’s always room for a faceless hivemind in Cyberpunk.

Flip side – Inevitable tragedy: The problem with fighting for yourself is that it is very selfish. Iconoclasts tend to burn bright and short for a reason. Like Noir protagonists, most Cyberpunk heroes eventually end up dead. You don’t have to kill off you players, but those hard decisions they make often have bloody consequences. If the players win by becoming part of a group, that group takes away part of their individuality and choices. Everything has a cost. If a player eventually becomes an unfeeling machine to succeed – literally or figuratively – that is a tale worth telling.

Information and access to it, is power: Fighting in Cyberpunk universes is not a way to victory. It is just a hard fact of life and a novel way to die in an alleyway. Make combat about survival and don’t allow heroes to just be able to fight their way out of an adventure. It’s always about gaining the information needed to expose/weaken the enemy and putting it in the right hands. Often this involves some kind of prop like a data disk that can only be accessed in a certain way. An adventure that is a chase around the city for a piece of information with multiple factions is one example of how this. Another is a quest into the ‘space’ the information is contained in like a matrix, internet or otherworldly planar space that houses sensitive information and unique guardians.

No Way Out & Urban Tribalism: The divide between rich and poor is so vast the two barely ever meet. Hermetically sealed communities keep the rich safe. Our heroes either come from disenfranchised backgrounds and are fighting to escape, or lead high class lifestyles and are having their eyes opened to their privilege. Make sure that someone always feels like an outcast, that when players look like they are about to go up or down in social status, something happens to reinforce the glass ceilings and floors. Players CAN progress – it must just be harder than usual. Another way to show this is by NPCs occasionally dying of routine illnesses/accidents that could have been treated if they were richer. Remember that everyone wants what everyone else has and on the poorer end of things, that means people are moved to violence and gang culture.

Oh, and make sure you set it in a city and have a neon light somewhere in the room. That won’t annoy anyone, honest.

Genre Police: The Mother Of All Punks! 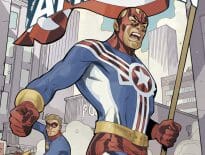 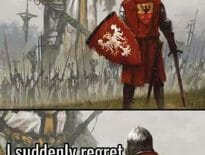