Tucked away in the English down of Lymm, in Cheshire, there’s a small team of veteran digital designers called Nomad Games. They’ve got their hands on the Fighting Fantasy license!

Here’s what Steve Jackson had to say about that!

We are proud to have been working with Nomad on Fighting Fantasy Legends. Throughout the development they have striven to maintain the look and feel of the Fighting Fantasy world of Titan and have succeeded admirably. Plus they have introduced a whole new approach to Fighting Fantasy, bringing cards into the gameplay.

Legends mixes three titles together. In one adventure you have The Warlock of Firetop Mountain, City of Thieves and The Citadel of Chaos. This means to complete the game you have to deal with Zanbar Bone, Zagor the Warlock and Balthus Dire. Good luck.

As this year marks the 35th anniversary of Fighting Fantasy it does feel like time to try a new twist.

“Fighting Fantasy has survived the test of time, and I’m delighted that Nomad are reimagining our gamebooks in an exciting new way for digital.
They have linked together three classic titles, The Warlock of Firetop Mountain, City of Thieves and The Citadel of Chaos, to let players to explore the world of Allansia in a thrilling solo adventure with lots of familiar characters and creatures and to meet and defeat!

Where can you get Fighting Fantasy Legends?

Geek Stuff Is this… what… a sexy robot calendar?… 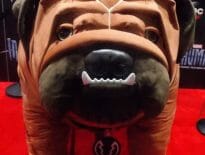 Geek Stuff 10 trends spotted at the San Diego Comic Con
wpDiscuzComment Author Info
Manage Cookie Consent
This site uses cookies 🍪, and links are ads that may earn bloggers some money 💰, and with this alert, I very much hope that these dark truths 🧌 are acknowledged.
Manage options Manage services Manage vendors Read more about these purposes
Preferences
{title} {title} {title}