You are here: Home / Books / Comics / Fear the social media followers: A review of The Kill Screen 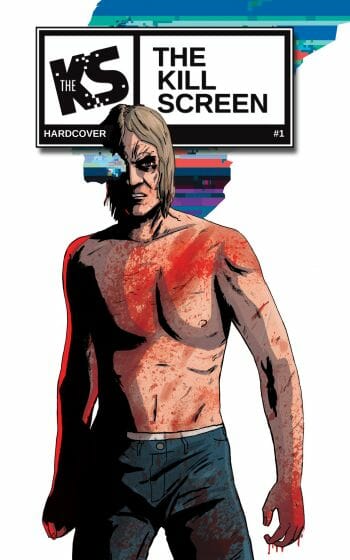 I looked at the first issue – ILOVEYOU – of The Kill Screen back in 2014 and really liked Mike Garley’s comic book project.

This wasn’t a zombie end of the world. This was a weird apocalypse in which people had become infected by some weird digital virus. Those infected seem to manifest digital pixels around them. Some turned into either blue team or red team. Those two teams would fight each other unless their opponents weren’t around and in that case they’d probably go after you.

In ILOVEYOU we deal with two survivors who notice some strange behaviour of an infected and then get side-tracked by the worthwhile challenge called “not being killed”.

The core additions to the full The Kill Screen add to the number of uninfected survivors as we meet more people. These unlucky folk also pick up Followers. Born from social media jargon and apparently worshipping Cats these Followers are relentless, seem to grow in number, and track the survivors cross-country and are determined to catch them.

This may sound silly or quirky. It really isn’t. After setting up the blues and reds as zombie-like horrors, the Followers are smarter, better organised but just as determined. As a result the Followers are quite scary. There’s more to The Kill Screen than just taking the group of survivors through a series of conflicts with the Kill Screen infected. There’s a tasty collection of one off stories and guest pieces at the back.

These one off stories are quite nice insofar as they tie up some loose ends or loop back to explore some characters we’d previously only met in passing. There’s the Panda heading girl and the Lion man, for example. Furries? Second World Sims?

The Kill Screen is thoroughly recommended.

The hardcover came about as a Kickstarter pitch. 231 backers pledged more than £7,200 to create the comic.

Miss out? Mike Garley will be launching the hardcover collected edition at Comic Con London in just a few days.

My copy of The Kill Screen was provided for review.

Fear the social media followers: A review of The Kill Screen