You are here: Home / TV / Online Shows / What stirs in the Titansgrave: Ashes of Valkana (Part 2)

You’ll benefit from reading Part 1 or just skimming Geek Native’s Titansgrave coverage before digging into this post. Why? We’re looking at Wil Wheaton GMing the second part of his Titansgrave: Ashes of Valkana scenario in this post.

There’s a scene in this episode in which Wil, as the GM, apparently breaks a golden rule and tells the PCs what they’ve decided to do. Give the video a watch and let us know whether you think this was a valid case of when it’s okay to break the railroading rule.

This episode is called “Evil Awakens!” and that must be a reference to the Hellions, including the beer guzzling Alpha, that turns up later but also a nod towards the wider plot. Watch the intro and ask yourself exactly what they mean by the sky falling in on Empire.

The introduction is valuable. It helps set the scene and also showcase exactly the new style of entertainment that Titansgrave: Ashes of Valkana is. The motion comic scenes we’d seen in part one combine wonderfully into a clear summary.

There’s a bit of a parallel with the first part of Titansgrave here in that the PCs drink, party and then get sucked into an adventure. That’s why I think Wil was correct to tell the players what their characters wanted to do; they’d all made the rolls, failed and where drunk – even then they had a choice. A GM giving a strong steer on in-character actions when those characters are under the influence of something foreign (mind control, illusions, particularly strong booze, etc) feels entirely appropriate.

I think we see some nice GMing from Wil with the dwarf manning the toll both. Wil quickly brings in a background element for the players and does so in a way that leaves the doors open for further encounters. There’s some lovely jeopardy when the thief character tries to shortcut the toll booth – very wisely – by sneaking in and helping herself to the cash. There’s a conflict here in that Wil can’t let the scene get short changed too easily and yet has to let the thief do what she does best. I worried that the loot the from scene was a cop-out but there’s a brilliant rescue later in the form of drunken revenge.

The battle with the Hellions is interesting. There’s an immediate contrast with the raiders from before; the Hellions are strange, unknown and far more magical. Their teleport-like powers were used to good effect but I’m left in mix minds over the attempts to use energy weapons in the mill. In hindsight, exactly as his PCs felt, shots around mill dust was a bad idea. During the scene itself I focused on the idea that the Hellions had some sort of magical protection that was kicking into effect.

The players – Hank Green (Aankia), Laura Bailey (Lemley), Yuri Lowenthal (S’lethk) and Alison Haislip (Kiliel) – are a good bunch. Laura seems confident with Lemley, Yuri is taking his bad dice with good nature, Hank, I suspect, is a bit of a mastermind and Alison is bringing her background to life with the really easy but effective “father?” question which pretty much each dwarf we see.

The big debate for me is how the battle against the Hellion Alpha went. They group had done well, shame they were penalised for not being explicitly clear with their sneak attack plan but finally S’lethk had some good dice behind a move. As it happens, Wil played straight by the rules and Hank’s Aankia stole the kill. We’d seen the dead bird gag previously bring some success back into Alison Haislip’s sneaking but the “tidy up the ooze” approach didn’t work so well to bring magic back to S’lethk’s magic. The only alternative would have been not to announce the death of the Alpha until after the final dice of the round had rumbled.

How would you have handled the scene and are you looking forward to any more “classic Jeremy lines?” Why does the Baron’s beer have hair curlers? 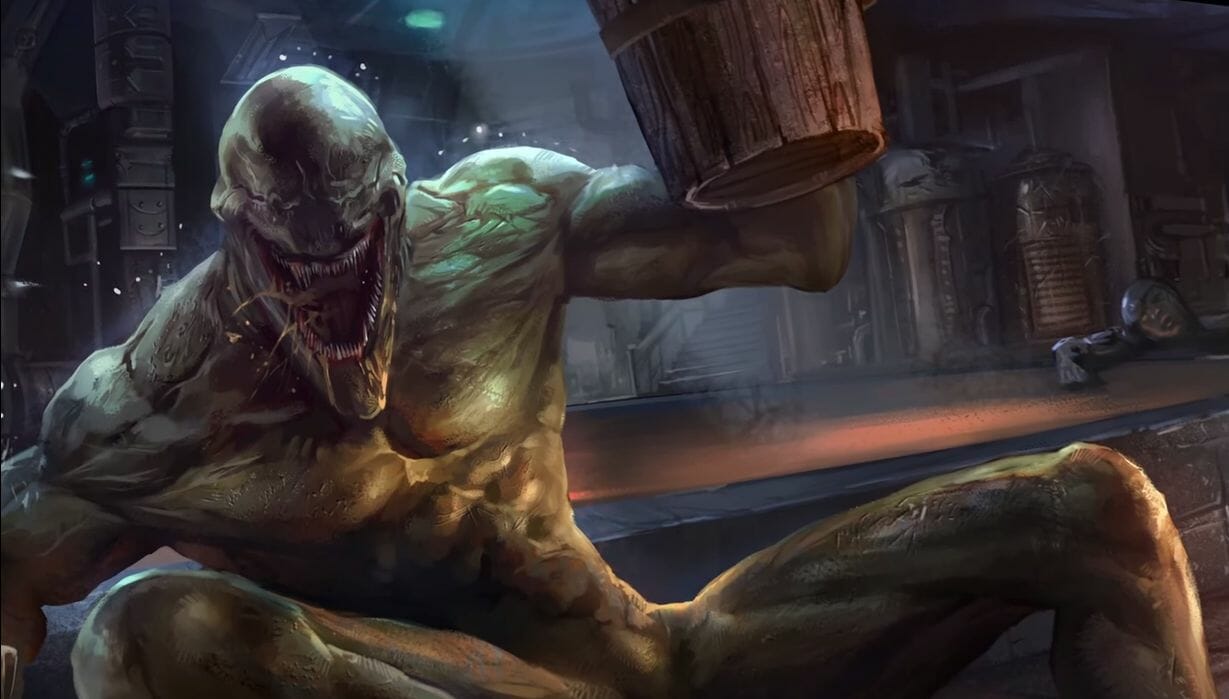 GeekNative titansgrave is lovely. I want to play!

Ticobell titansgrave If you could be one of the four characters in Wil’s game – which one would you want to play?

GeekNative titansgrave oh man. Kiliel or Lemley. Was tempted to put together a quick Kiliel cosplay for SDCC, but money.

Ticobell titansgrave Great choice! If you ever whisk up some Kilielplay let us know! – http://www.geeknative.com/tag/cosplay/

GeekNative titansgrave Will do!

Hair curlers… Grandma´s Sweat Stout… I get it. :-)

I’m really enjoying the series (though just catching up on it now).

In terms of how to have avoided stealing S’lethk’s thunder at the end, Will could have described both events as happening simultaneously to take down the Alpha. Despite initiative, in real life different actions would be overlapping.

As it was, the dice rolling made it a pretty easy kill (Will rolls like I do). Sometimes it just goes that way (though reintroducing a few of the minor Hellions may have made it more of a challenge).

What stirs in the Titansgrave: Ashes of Valkana (Part 2)