This shotgun is many times more powerful than the lightsaber styropyro had already built.

As Chris Mills over at Gizmodo points out a 40 watt laser is hugely more powerful than the 0.005 watt lasers you can buy from stores but still a far off the US Navy’s prototype cannon that blasts at 30,000 watts.

If you’ve seen laser vs black balloon videos before you’ll know it can take a while for the balloon to pop. That’s not the case here as the demonstration uses clearly show how powerful the 40W shot gun is.

The other interesting twist is that this weapon isn’t illegal or even regulated in the States. I don’t imagine lasers are regulated anywhere … but perhaps just because the legal system is lagging behind the technology. 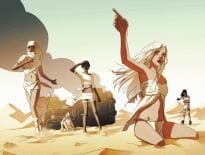