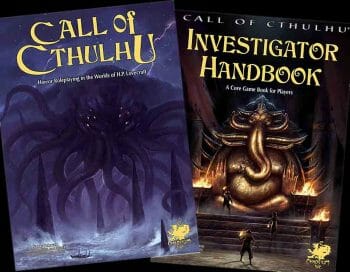 Greg Stafford and Sandy Petersen have returned to Chaosium. Petersen is the original designer of Call of Cthulhu the RPG Chaosium made famous and Stafford founded the publisher back in 1975 with a war game called White Bear and Red Moon (later renamed Dragon Pass).

In June of 2013 Chaosium raised over half a million dollars in a Kickstarter campaign to fund the 7th edition of Call of Cthulhu. Ed’s reviewed both the corebooks for Geek Native. The books are good but not all the rewards have been fulfilled – some people are still waiting.

So, is this a rescue? It would be tough to say that Chaosium was struggling. Delays on Kickstarters are normal. That said; Greg Stafford who returns as President and CEO, spelt out four things the new management team aims to do.

That’s not beating about the bush. There’s the acknowledgement of problems and promises of solutions.

Are there reasons to worry? Over in a forum thread at yog-sothoth.com, Sandy Petersen got involved and moved to reassure people;

One way of looking at it is that the old Chaosium team is back again. Personally I think this is cause for rejoicing not worry.

Here at Geek Native we wish both the old and new teams well and look forward to finding out what happens next.

Mobile Can you work out these movies from just Ingress Gl…
💰 Copper Coins 💰 Geek Native is an affiliate and may earn commission on purchases you make from third-party sites.
🍪 Privacy & Cookies 🍪 The site uses cookies to survive. By accessing the site, you agree to use your browser to control cookie use or take 1d4-3 privacy damage (tracking). If you defeat cookies via ad blocking, please consider the Patreon. An intro to cookies, and how to control them, can be found here. I Manage Cookies