You are here: Home / Games / Tabletop & RPGs / 5 of the best RPG reviews on Geek Native this year 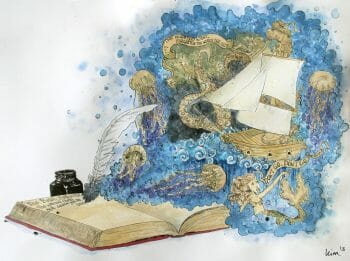 Geek Native is a fairly small blog with a community that spreads across social networks like Facebook, Google+, Pinterest and Twitter. There are no paid writers. Heck, the site doesn’t make a penny in profit.

The thing is; Geek Native’s community is influential. You are influential. If you’re reading this then you can influence the game buying (or anime, book, etc) decisions of quite a few people. It’s from Geek Native’s influential community that we’re lucky enough to find some talented writers and reviewers. This year a whole bunch of people have stepped forward, found the time and the words to offer up some insightful reviews.

Here are five of my favourite:

It’s generally accepted that one of the flaws of Dungeons & Dragons 3rd edition was the all-powerful dominance of spell-casters at higher levels. For many, as a quick visit to the Paizo forums will show, the need to fix the Fighter is still an issue with its ultimate successor, Pathfinder.

The business of roleplaying can be a tough sell to people who have been exposed to the experience previously in an uncontrolled or raw form. Speaking from experience, I have seen people enthused by the prospect turned sour when they saw the size of the average core rule book.

Read the full Into the Odd review here.

Every facet of Tolkien’s epic is taken with great seriousness within the pages of The One Ring. A hefty book of over 300 pages, The One Ring is packed with some striking, evocative art that manages to capture the feel of the books while cleverly side-stepping any similarities to the movies.

Read the full The One Ring review here.

The Ministry of Peculiar Occurrences

If that initial bit of bad had you moping, fear not! The rest of this RPG is completely awe-inspiring, as far as I’m concerned. It does a wonderful job of setting up the victorian steampunk vibe. Understated notices that have a deliciously British feel to them are scattered throughout the book.

Nightmares of Futures Past

Fortunately, the book also details ways for mutant characters to survive in a world that hates and fears them. There are rules for devices used to confuse Sentinel scanners and mask mutant powers.

Read the full Nightmares of Futures Past review here.

If you’re mad keen to write to Geek Native then it does no harm to get in touch now. That said; I usually put a call to action out when the to review: writers with time ratio gets even more crazy.

The first couple of posts any new writers publish use the Guest Reviewer account. Those reviewers who’re able to publish a few reviews in a few months then get their own author account and have their original reviews transfered to them. Why? This means the blog isn’t creating author-level accounts straight away.

5 of the best RPG reviews on Geek Native this year

Geek Stuff Sci-fi fans expect hostile aliens; everyone else p…
💰 Copper Coins 💰 Geek Native is an affiliate and may earn commission on purchases you make from third-party sites.
🍪 Privacy & Cookies 🍪 The site uses cookies to survive. By accessing the site, you agree to use your browser to control cookie use or take 1d4-3 privacy damage (tracking). If you defeat cookies via ad blocking, please consider the Patreon. An intro to cookies, and how to control them, can be found here. I Manage Cookies