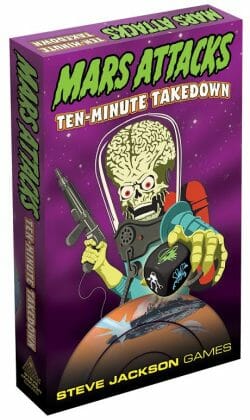 Players flick the game’s custom die from their flying saucer at the human cities and claim points as they crumble. The demo of the game at Gen Con used rings for circles that peeled off with each hit to award points.

The recommended retail price is around $9.95.

PC Elite: Dangerous launch trailer
💰 Copper Coins 💰 Geek Native is an affiliate and may earn commission on purchases you make from third-party sites.
🍪 Privacy & Cookies 🍪 The site uses cookies to survive. By accessing the site, you agree to use your browser to control cookie use or take 1d4-3 privacy damage (tracking). If you defeat cookies via ad blocking, please consider the Patreon. An intro to cookies, and how to control them, can be found here. I Manage Cookies