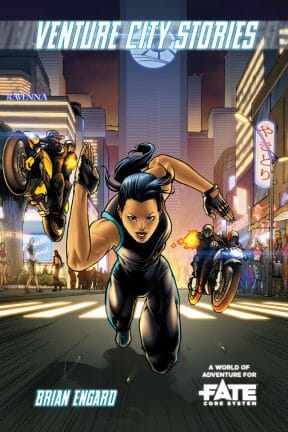 The real superheroes of the City have corporate sponsorship… or at least those heroes who have sanctioned powers and the legal teams behind them to cover for claims of massive structural and collateral damage. Superpowers appear to be a natural phenomenon, a potential in the whole of humanity, activated in a lucky few – or kickstarted through science! Spires of glass and chrome rise from the urban jungle, with Suits defining the Mission Statement for the future, and wage-slaves breaking their backs to make it happen. That’s the backdrop for Venture City Stories, the first Patreon-funded Fate Core project from the Evil Hat Production team.

Form
Venture City Stories is a World of Adventure Pay What You Want PDF adventure supplement for Fate Core, written by Brian Engard, and published by Evil Hat. The 30-page offering includes a setting, a basic adventure outline, and tweaks to the Fate Core system for creating superheroes.

Artist Tazio Bettin turns in a stunningly strong set of illustrations – an absolute win for this adventure supplement in my opinion. The PDF includes a dozen pictures and character illustrations that effortlessly bring the setting to life. My favourite? – Harry White going crazy-ape on page 16, just about to get taken down with a sneak attack by The Ghost.

The supplement follows a standard one-column format, with clear text and headers. Boxes with white background contain character stats for key individuals, while blue-backed boxes brief the GM on Nothing Ventured, a quick prep adventure. The adventure boxes provide all the information and pointers you need to get a game running without needing to read everything else.

Features
In essence Venture City Stories serves up three components rolled into one – a setting outline, an adventure with five pre-generated characters, and a character creation system for superheroes. Packed into a 30-page supplement that you can practically pick up for nothing, that’s a pretty credible offering. Evil Hat has funded production of this World of Adventure module for Fate Core using the Patreon funding model, with the promise of more to come. In practice, without intending to skip to the end, I believe this supplement warrants a ‘tip’ to the people involved by paying above the zero rate offering.

Brian Engard fills the bulk of the adventure supplement with background information on the factions, places and people of Venture City. As mentioned in the introduction, everyone in this setting has the potential to be a superhero. However, the genetic triggers for this only fire off in a few naturals, so it wasn’t commonplace – until someone in a corporate glass box decided to stack the odds with some questionable experimentation. Now, corporate superheroes dominate the landscape – though the process remains experimental and not entirely predictable. These heroes serve as security, enforcers and PR frontliners, saving those who can afford to be saved. On the ground, the workers and the downtrodden can aspire to long hours, crime, fear for their lives, and the occasional appearance of unsanctioned rogue heroes on the run.

On face value, it almost looks like it shouldn’t work. However, Brian crams a pile of content into the slim page count. He gets the setting across by skimming the surface, offering just enough information to provide a flavour and info-boxing the core content to support running Nothing Ventured. Like earlier books in the Fate Core set, you learn a lot by example – and Venture City Stories features plenty of non-player and pre-generated character heroes for you to get a grip of the principles.

Character Creation and Powers boils down to just three pages. Like the customisations served up in the Fate Core System Toolkit supplement, Powers tweak the system without fundamentally changing it. By increasing the number of Stunts – mechanical effects that normally allow you to bend abilities and skills in unusual ways – you create powers by stacking more than one Stunt together. In addition, you add colour by including Special Effects, a Drawback and Collateral Damage. So, in the included example of ‘brick’-style bruiser, you might assign Stunts for brute force enhancements, better Fight when smashing things, and extra armour when under physical attack.

If you have the System Toolkit or the inclination to tinker, Venture City Stories gives you a foundation to work from and expand upon. As a short term setting or one-off, I don’t think it needs it, but long term you might feel the desire to tweak the sliders and make it your own.

The adventure, Nothing Ventured, sets the player heroes up as deniable assets, employed to find out how an experimental supers drug has found its way out into the streets. The interplay of corporate powers and underworld factions might put the fragile balance in Venture City at risk unless the team can uncover the culprits.

Final Thoughts
Venture City Stories serves up a gritty heroes campaign with a skeleton of setting and mechanics, condensed into a slim but satisfying volume. The Patreon model means that we can look forward to further releases on a monthly basis – and if they maintain this level of quality, I believe that Fate Core has a bright future of potential settings and accessible one-shot adventures. A concise, well executed and extremely well illustrated first effort.

Anime Irregular Reconnaissance: Anime #7
💰 Copper Coins 💰 Geek Native is an affiliate and may earn commission on purchases you make from third-party sites.
🍪 Privacy & Cookies 🍪 The site uses cookies to survive. By accessing the site, you agree to use your browser to control cookie use or take 1d4-3 privacy damage (tracking). If you defeat cookies via ad blocking, please consider the Patreon. An intro to cookies, and how to control them, can be found here. I Manage Cookies