You are here: Home / Books / Actual alternative: A review of The Star Wars 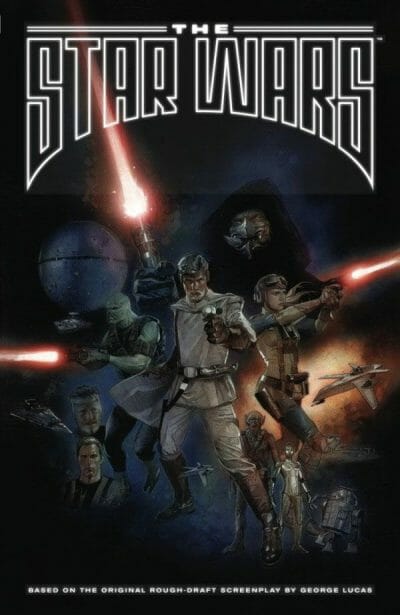 The Star Wars is already an award winning comic; picking up the Diamond Gem Award for Best Licensed Comic in 2013. This graphic novel came out this winter and feels like an ideal gift for any Star Wars fans.

You can imagine that Star Wars (A New Hope) had a script that was worked on over time, changes made, scenes added, scenes dropped and so forth. You might not know just how radically different the original was from the final. The original was called The Star Wars. We had Skywalkers and Starkillers. R2D2 talked. We had Sith knights. The Jedi had a longer name. The Force was The Force of Others. Han Solo was… well. It gets hard to describe the incredible differences without getting into spoilers.

No doubt; much of the fun in reading The Star Wars is just to see how incredibly different it is.

It’s a good graphic novel but it’s not as good as the film we finally got. George Lucas is the named author and he’s there along with J.W. Rinzler and Mike Mayhew. Lucas wrote the original and Rinzler with Mayhew adapted it.

If you’re a fan of the art in the likes of X-Men Origins: Jean Grey or know his work in Savage then you’ll be rushing to buy The Star Wars. Mayhew draws very well. Equally, Rinzler is known to the Star Wars community through his work on several behind the scenes books.

This graphic novel collects issues #0 to #8 of the series. It’s a fantastic way to launch into this alternative version of Star Wars. As it happens issue #8 is a good place to finish the collection. There’s certainly a conclusion – it just so happens that Star Wars fans (heck; everybody) knows there could be more and it’s easy to be left wanting more.

The video tour above is made with Google+’s Auto Awesome and applies colour filters to my smartphone pictures of the book. It’s provided as a teaser and not a robust evulation of the graphic novel.

My copy of The Star Wars was provided for review. Published in the UK by Titan Books and written by George Lucas, Mike Mayhew and J.W. Rinzler.

Actual alternative: A review of The Star Wars

Tabletop & RPGs Are you brave enough to Enter the Shadowside: Dest…
💰 Copper Coins 💰 Geek Native is an affiliate and may earn commission on purchases you make from third-party sites.
🍪 Privacy & Cookies 🍪 The site uses cookies because that's the internet. By using the site, you agree to their use and 1d4-3 privacy damage (tracking). If you defeat cookies via ad blocking, please consider the Patreon. An intro to cookies, and how to control them, can be found here. I Accept