You are here: Home / Games / Tabletop & RPGs / Getting started with D&D 5: A review of Hoard of the Dragon Queen 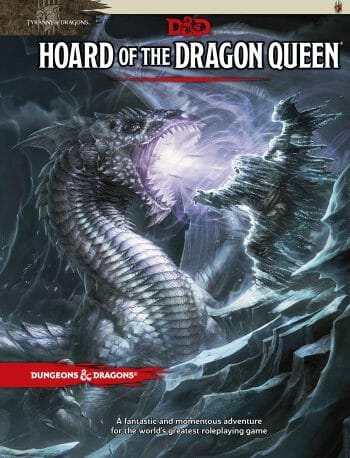 Hoard of the Dragon Queen

Hoard of the Dragon Queen is designed as the inaugural campaign for the new Dungeons & Dragons. It is set in Forgotten Realms, on the Sword Coast and much of the action takes place between Neverwinter and Baldur’s Gate. Even if you’re new to D&D those are two names which you might recognise. This is a smart move from Wizards of the Coast.

Wizards of the Coast aren’t the only company involved in the campaign. Kobold Press are too. The writers are Wolfgang Baur and Steve Winters of Kobold. You might expect that WotC would turn to respected writers with deep roots with the RPG community and leverage those skills and relationships to ease in D&D 5e. I think Kobold Press’ logo appearing in Hoard of the Dragon Queen is far less unexpected. It’s not unwelcome, though, I hope to see future partnerships with other publishers. However, if you’re getting started with D&D 5e then none of this matters to you.

There are two main considerations when viewing the adventures in Hoard of the Dragon Queen as an inaugural campaign, suitable for all gamers, to Dungeons & Dragons 5th edition. The first is that you need other material to get going. You need the Player’s Handbook. You also either need the Monster Manual (which wasn’t available when Hoard came out) or the free to download Basic Rules and the Tyranny of Dragons online appendix to get going. If you don’t have the books and don’t want to download the freebies then you’ll struggle with this. Key stats – the dragons, for example – aren’t included. Most NPCs are.

The second possible issue for newbies is that this adventure doesn’t naturally flow on from the Starter Set. The first paper copies of D&D 5e came in a box set designed to introduce the game. It makes sense that some new players have decided they liked that experience and want more. At least, I hope that happens. The Starter Set used pre-generated characters and the adventure The Mines of Phandelver entertained them. Hoard of the Dragon Queen starts again; the assumption is that heroes begin at 1st level and will be level 7 or perhaps 8 by the end of the book. There will be a sequel, Rise of Tiamat, that takes on from there.

It may be a bit late to be talking about spoilers. If you suspect you’ll be a player and not the Dungeon Master then stop reading. That said; I think it’ll be quite hard to stop players from discovering the next official campaign book is called The Rise of Tiamat and they may well start putting 2 and 2 together.

The Hoard of the Dragon Queen begins with a dragon and allies attacking a village. A perfect start. Right in the deep end. There’s lots for characters to do that doesn’t involve being chewed up by the dragon. My favourite, likely, encounter is right at the end when a Dragonborn champion challenges one hero to a fight. It’s likely the hero won’t win, won’t die and so we’ve a nemesis already. A fight that isn’t to the death is also a nice way to start challenging expectations.

I was especially fond of the liberal addition of maps throughout. I didn’t need to imagine key locations. I could see them. The game, however, does not contain any pull-out maps for miniature use. I’d argue that if you’re getting started in D&D then you may not have miniatures. If you’re a miniature user then the chances are high you already have a generic map solution you could easily apply to the scenes in the game.

The book feels like an investment. Yes, it’s perhaps a little thinner than some 4e adventures but this is hardback, full colour and with pretty quality paper. There’s no shortage of artwork. I think one of the biggest challenges a DM faces is whether to try and show their players what the official illustrations of monsters and NPCs look like or whether it leave it all to imagination. The downside to paying for the investment is that it’s not cheap – currently sitting at just under £17 on Amazon.

The plot itself sees the Cult of the Dragon looking to bring a certain dragon-bad back from the Nine Hells and to Faerun. They’ve even managed to rope in a renegade faction of Red Wizards of Thay. Plenty of baddies for the heroes to deal with.

This plot is dished out in eight “episodes”. This is both a good idea and problematic. It’s a good idea because bite sized chunks are easier to manage and if WotC can encourage new blood (or old) to start playing every week then the industry benefits. On the downside the episodic format does tend to encourage a “monster of the week” or perhaps “challenge of the week” format.

As with all pre-written adventures, intended as an introduction to the setting, system or hobby, a lot depends on the skill of the DM. A DM who feels totally out of their depth might struggle to keep things interesting during the road travel or to keep up when there a flood of action. There’s always a challenge between scripting everything explicitly and sketching a framework to give the DM something to lean on. In my opinion the Wizards of the Coast and Kobold Press partnership have found acceptable middle ground between the two. I don’t think any new group would read this book and say “I don’t know what to do!” nor any experienced group or DM pick up this book an say “I dare not embellish or anything!”.

I think Hoard of the Dragon Queen is a good start to the new world of Dungeons & Dragons.

The video tour below lets you peak inside the book. It was created with Google’s Auto Awesome and adds colour filters to the art.

My copy of Hoard of the Dragon Queen was provided for review.

Getting started with D&D 5: A review of Hoard of the Dragon Queen 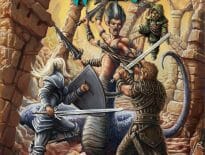 Tabletop & RPGs Fixing the Fighter: A review of Path of War 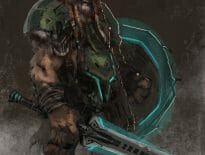