For the last two years we’ve put 10 superhero RPGs in the ring and Geek Native readers have voted for their favourites. Who deserves to win this year?

Can’t see your favourite superhero RPG in the list below? Leave a suggestion in the comments below after you check the 2012 battle and the 2013 conflict first. Want to vote for a title featured in a previous year? The polls are still open so go ahead and select a star rating. 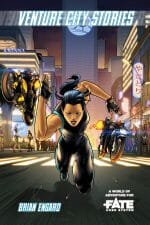 Venture City is a superhero toolkit for Fate Core. Written by Brian Engard it is a 30-paged, pay as much as you want, system for bringing superpowers, villains, corporations, gangs and so forth into the near-future setting. In Venture City supoerpowers are for sale.   [Download Now] 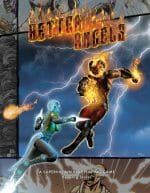 Better Angels has player characters possessed by a demon. The demon is responsible for the character’s powers and is trying to drive the character on to acts of evil. Meanwhile, the character must try to resist the demon without that subterfuge being discovered. Better Angels is written by Greg Stolze and uses the One-Roll Engine.   [Download Now] 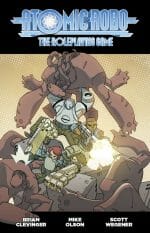 Atomic Robo is a Fate Core powered game based on the comics by Brian Clevinger and Scott Wegener. Players can accept the mantle of an Action Scientist or play as something else from super-science like immortal robot or powered spy. Atomic Robo started in 2007 and the RPG was published in 2014.   [Download Now]

The Super Powers Companion lets Savage Worlds players take to the superhero genre. Written by Shane Lacy Hensley, the creator of Savage Worlds, and is therefore considered by many to be the official superhero conversion for the game. The second edition is freshly out for 2014 and adds new Edges and Hindrances.   [Download Now] 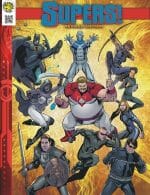 SUPERS Revised Edition builds on the original rules from Simon Washbourne. The revision brings in unified mechanics to save you time, new Powers and Aptitudes, the ability to Apply Boosts and Complications to any aspect of the game and ahost of optional rules. SUPERS Revised is the result of a successfull Kickstarter that nearly doubled the funding goal and attracted well over 200 backers.   [Download Now] 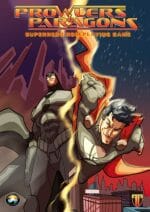 By LakeSide Games and a star of the 2013 Superhero Week with a whole bunch of freebies, Prowlers & Paragons is a rules-light, narration-driven RPG designed to generate a four-colour superhero comic book feel. Both the players and the GM take turns narrating game events, so P&P is collaborative but there is the role of the GM and the superhero RPG isn’t entirely freeform and open-ended.   [Download Now] 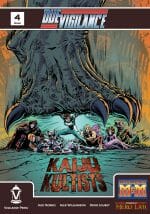 Due Vigilance – Kaiju Kultists uses adapted Mutants and Masterminds 3e rules to cope with the titanic size of the creatures in play. The game has monster-versus-city mechanics as well as taking a look at the human-sized cultists. The game was written and designed by Jack Norris who’s a veteran of the Mutants and Masterminds scene.   [Download Now] 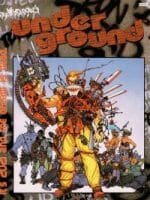 Created in 1993, inspired by Aeon Flux, Underground is a grim and girtty yet satirical superhero game that explores a near future (2021) in whuch the American Dream has failed. In the “future” of Underground a UFO crashes into the Florida Everglades in 1996. The alien technology is amino acid based and so a revolution in genetic engineering is launched. By the early 2000s, the USA has annexed most of Canda, Europe is dominated by Neo-Detchland and mankind is building on the moon. Underground uses a version of the Mayfair Exponential Game System, originally ccreated for the company’s earlier DC Heroes license.   [Download Now] 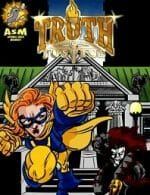 Offering streamlined and fun gameplay, Truth & Justice encourages improvisation and freewheeling imagination while stressing the importance of the hero’s personal ties and motivations alongside their superhuman powers. Truth & Justice puts the emphasis on how capable a character is in the context of a superhero story-game rather than trying to build a simulation of reality that also has unreal powers.   [Download Now] 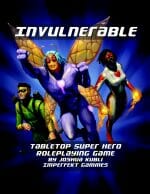 Grab some dice and save the world. Invulnerable is a superheroes game that supports a wide range of power levels; from street-level crimefighters all the way up to interstellar paragons. The game encourages roleplaying with a Motivations and Central Contradictions mechanic. Linked in this Superhero Week battle is the Vigilante Edition, published in 2014, which brings new Talent Focuses, Power Enhancements and revamps the Power Modifiers. [Download Now]

If you’ve taken part in this poll then it could win you a whopping great Amazon voucher. Visit our Superhero Week competition to see if you’re in time.

devlin1 EvilHatOfficial Yes, but judging from the votes and stars this will give you empirical proof that you’re better than me.

devlin1 EvilHatOfficial Zelgadas Arguable. Robo in a wider supers universe wouldn’t be out of place, and the drifts are pretty likely.

fredhicks EvilHatOfficial Zelgadas True. But from my perspective, I didn’t try to make a supers game, I tried to make a *Robo* game.

devlin1 fredhicks EvilHatOfficial Zelgadas You made A SUPER GAME and someone typo-ed an extra S in there.

devlin1 fredhicks EvilHatOfficial Zelgadas Well, I’ve made super heroes with it, so….

Zelgadas EvilHatOfficial The important thing is that they like the both of us more than everyone else. By a wide margin.

Aw crap. I tried to vote for Supers and hit 2 stars instead of four. If someone could bump it up a couple of stars it will be a little more accurate.

@Mr Nay You should be able just to change your vote by hovering back over the stars… UNLESS this is a clever voting winning ploy for your favourite :)

Tabletop & RPGs Weapons and their Pet Heroes: A Review of Wield

Geek Stuff Superhero Week: Gambit cosplay
wpDiscuz
💰 Copper Coins 💰 Geek Native is an affiliate and may earn commission on purchases you make from third-party sites.
🍪 Privacy & Cookies 🍪 The site uses cookies to survive. By accessing the site, you agree to use your browser to control cookie use or take 1d4-3 privacy damage (tracking). If you defeat cookies via ad blocking, please consider the Patreon. An intro to cookies, and how to control them, can be found here.
I Manage Cookies