You are here: Home / Games / Tabletop & RPGs / Weapons and their Pet Heroes: A Review of Wield 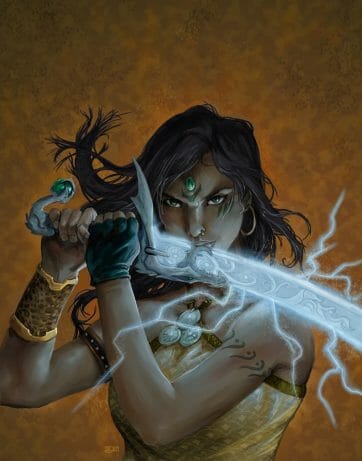 Think of an example where a story has been driven by the conflicting purpose of two personalities. Now, think of an example where one of those two competing forces of intent belonged to an inanimate object. Not a plot device… never something so tame and relatively goal-free. You might have thought of Aladdin and the Lamp, for example, but the Lamp didn’t have a personality, it was the Genie inside. If you think Harry Potter and the Horcruxes, again… I think they’re a goal-free plot device and the true competition comes from Voldemort.

I think the classic example would be Elric and the sword Stormbringer. Another would be Frodo and the One Ring. Or Rincewind and the Luggage. However, I think you can easily break the binding chains of fantasy and look a little further afield. For example, how about Christine and Arnie Cunningham? Michael Knight and KITT? The Doctor and the TARDIS? For that matter, what about Jim Douglas and Herbie? At heart, each pairing has a varying degree of self-interest, goal and willingness to cooperate with the so-called owner.

Sliding away from means of transport (but not far), how about any of the Lanterns from the various DC comic books and their Power Rings? Roj Blake and the short-tempered blinking-box Orac? For that matter, any number of planetary or battle computers – with infallible AI and far-reaching control – and their creators in innumerable episodes of Star Trek. In that case, do GLaDOS and Chell count?

Anyway… I digress heavily. I’m sorry about that; I hope you get the drift. In these examples, you have two competing forces, but one relies on the existence and actions of the other (in some measure) to further their cause. The hero or owner, in the meantime, exerts some measure of control and power using the artefact to further their own ends.

On such a basis many stories have been created – I think you got that gist already in the last few paragraphs. Well, in May 2014, John Wick ran a Kickstarter for a roleplaying game called Wield, where you play a powerful artefact and the heroes who carry them. With the open release of the game to all gamers, you too can now tell tales of wilful weapons, or vatcha.

Form
Wield is a 101-page document in electronic format, both PDF and ePub. Written by John Wick and Gillian Fraser, it comes adorned with numerous fine interior illustrations – and a catchy front piece – by the skilled hands of Storm Cook and Jessica Kauspedas.

The book has a digest-sized format with a single column of text. Pictures scatter the interior, as do many and varied italicised examples. The format makes reading on a tablet (or a phone for that matter) an easy task – while the black-and-white illustrations should mean not major overload on your printer if you feel inclined to run off a hard copy.

As this is a Kickstarted game, you get 11-pages of backers names at the back of the book – but, you’re still getting around 90-pages of text and illustrations for your $5.00.

Features
To illustrate the concept of wilful weapons and artefacts, Wield starts out with Three Stories that tell of a weapon, a cursed coin, and an impatient gypsy caravan. Each provides a view of an owner and the artefact that wrestles for control, seeking out it’s own destiny. These ‘vatchas’ form the central focus of the game and serve as the primary characters.

The Heroes… well, they’re typically meat shields and conveniences, all too often outlived and outgrown by the artefacts. You can definitely home in on the likes of Stormbringer, the TARDIS and The One Ring here. Each has outlasted those who would seek to carry, manipulate or control them. Wield is not about getting too attached to your hero – they’re not what the game’s about.

After the stories, the section on Vatcha deals with creating the artefacts. Depending on the game, you might have one or more in a group. If you take the example of Herbie, you would have a single artefact and many passengers. On the other hand, in a game of Greek heroism, each proud and oil-slicked warrior would have an artefact bestowed, no doubt, by the gods themselves.

You choose the form of the weapon, the domains of it’s powers – like Air, Death or Light – and define it’s goal, history and connections. How has one artefact impacted on the existence, owners or purposes of another? Like a few other story games, you pass things around the table and players each get to imprint their own creativity on the background of the Vatcha.

Finally, you deal with the factors that serve to undermine the artefact, like the means to destroy it and the measure of Control it willingly gives up to it’s owner. Control rates from 1 to 10 – but, an artefact that keeps too much Control bequeaths little power to those who carry it and can expect a hard time getting anything done. Who could return the One Ring to it’s true owner without a little power and a few ounces of (perceived) control?

The throwaway heroes have their own background, destiny and personality – but they’re firmly on the periphery. Indeed, the authors recommend the gamemaster – or Fate, as Wield titles the role – take sole responsibility for creating a bunch of heroes before a session and hands them out at random. Once you’ve created your Vatcha, you select a random hero and pass possession (but not roleplaying control) of your artefact to the right.

The System
Mechanically, the game’s system is about dealing with obstacles and people by measures of self-assigned difficulty. Players choose how hard or far they’re willing to take things. Do you chip away at any opponent or rain a storm of flashing steel down on them? Will you take the easy way with the low rewards or face the far harder path with all the wealth, reputation and glory that brings?

For Obstacles, it’s a matter of choosing the difficulty of the challenge you’re willing to face and rolling a result on 2 six-sided dice that equal or exceed it. However, if you take the easy route, perhaps another hero (or Vatcha) will opt for the greater challenge to get ahead and claim the prize before you. You can tweak the dice available to roll if your action ties in to your background, destiny, personality or gear – so, being a crafty alchemist intent on stealing primordial fire from the God of War using your cloak woven from silvan thread might work out in your favour every now and again.

In combat, you have the chance for some tense action around the table. Fate counts down from 5, and then all heroes simultaneously declare their intent with a hand gesture. Point at someone with one or more fingers outstretched and you declare an attack. Fist against chest with fingers extended, you prepare to defend. Raise a fist to show your intent to engage a Vatcha power.

What happens if you find yourself outnumbered and outgunned? Well, you get another chance to commit to an action, allowing those too quick to attack the option of falling back to a defensive position… but, they can only do so with a level one less. For example, an intent to attack for three wounds cannot change to a defensive action greater than two, though that defence works against all attacks if successful.

After this show of intent, the bids you made in signifying wounds or defence require that you roll dice to equal or exceed the difficulty – just as you would an Obstacle. It’s all very tense, with the possibility of some interesting diplomacy and frenzied back-pedalling. Things can also get interesting if someone commits to using a power only to find their Vatcha working against them.

Remember, we’re dealing with players here. When did they last get along, even in dire circumstances…

And The Rest
The remainder of the book deals with matters of Fate and Powers. The game-runner, Fate, has a measure of deity-like influence over the game. Player selected challenges may warrant adjudication to set the right level of challenge and in dire straits a hero might accept a ‘geis’ in return for automatic success (like promising to free all the slaves of a kingdom in return for surviving the flaming onslaught of a horde of raging dragons).

As mentioned previously, Fate creates the heroes, and this section guides you through the process of handling that and creating opponents, including groups and monsters. It offers suggestions on how best to handle players having more than one character – making the personality of Vatcha and hero distinct – and keeping players disengaged from their heroes.

It also offers some thoughts on avoiding a sense of player-versus-player and kicking off a game with some plot ideas. If I had a critical thought at this point, it would have been a desire for a few more pointers, seeds and alternate ‘worlds’ to explore – even if just the sketchiest of seeds. While the Vatcha sections comes with a lot of fine examples, the paucity in the Fate section begs for more attention.

The following, almost thirty, pages list the Vatcha powers, broken down by a dozen domains, with ten powers for each. In some instances, the powers vary only in their scope, especially for Destruction. In each instance, the higher numbers relate to the Ranks of the power, and the diminished Control the Vatcha retains. You might amuse yourself selecting options from these pages and trying to recreate various well-known, fictional artefacts… I suspect I might have fallen into that very trap if I didn’t have a review to finish!

Final Thoughts
A story-telling game of great artefacts and the unfortunate heroes who temporarily carry them closer to their goals, Wield is a game with enough crunch to deal with tough challenges. A sprinkle of crunch and frenzied hand gestures aside, the bulk of the game and the entertainment come from the fertile imaginations of the participants around the table and the challenges created by playing competing parties. I’m willing to believe that in the right frame of mind, even a newcomer to story games who handle the challenge of meeting Wield head on, but experiences may vary.

At heart – as with many story-focussed games – you get out what you put in, and investments may go down as well as up. However, reading through the game I found my imagination racing. The concept of Wield does not fit fantasy alone, opening up possibilities across genres like space opera, cyberpunk, occult horror, and superheroes. Any story pitting inanimate objects of power and their fragile, fleshy owners against forces denying their destiny will suffice.

Weapons and their Pet Heroes: A Review of Wield 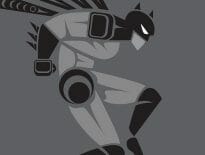 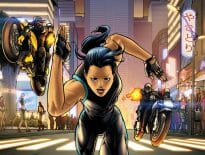