You are here: Home / Games / Tabletop & RPGs / An exclusive introduction to the stunning Fragged Empire RPG

You can get a look at the Fragged Empire RPG over on the official website in advance of the Kickstarter next week. (Update: Here’s the Kickstarter) Sometimes a look isn’t enough. Sometimes you need to know more.

Geek Native reached out to Australian graphic designer Wade Dyer who is leading the project to find out more about the sci-fi. The following post contains sample art from the game, including some images that have barely been shown before, a video demo of the skill system and an interview with Dyer.

The illustrations include a look at the Nephilim and their spacecraft, the Legion and the Kaltoran.

What’s the “elevator pitch” for Fragged Empire? In other words; if you only had a minute or two to describe the game to a roleplayer how would you do it?

Fragged Empire is an indie, science fiction tabletop RPG setting & system that I have been working on for the last four years. It will be Kickstarted in just a few days.

It is set in a far future ‘post, post-apocalyptic setting’. Following 4 non-human races as they seek to build a new society for themselves after barely surviving a genocidal war. As an example; one of the playable races (the “Nephilim”) are the descendants of the army that killed the other races.

The tag line is “Betrayed by your creators, you are a genetically engineered remnant, emerging from the ruin of genocidal war…”

The Fragged Empire website is a multi-media treasure trove with illustrations and even music. Surely that’s not all the work of a single creator?

While my artistic ego tempts me to do it all myself, I know that collaborations create the best work. Even more so when you consider how multi disciplinary our much loved hobby is. RPGs have room for almost everything; from theater, political science, visual art & even music.

I’m very passionate about working with emerging artists, you will intentionally see no big names attached to my book. While I have artwork from a dozen different artists, most will be done by 4 particular artists who have a passion for not only my project, but for their trade. Clonerh Kimura, Fyodor Ananiev, Alexandrescu Paul & Niam. These guys & gall have been fantastic to work with, so full of passion & dedication, they really get what I’m trying to do.

I have help from two very talented, young authors, Stuart McNabb (who has written most of the books short short stories) & Simon Nolen (who is FANTASTIC at writing small bits of favour text & helping me to flesh out the setting).

I also have music from Tim, a very talented audio engineer who gives away free Ambient RPG Tacks at Tabletop Audio.

There are a number of playable races in Fragged Empire and when it came to designing them, what came first? Did you illustrate a race that suited the look and feel of the game and then create the rules for them? Or did you create the race first and then try and draw them?

World building is an interesting & messy topic. While its my approach to generally start with the story, then move onto rules, then art… there are some inevitable (and wanted) bleed overs. Great art inspires great stories, & great stories inspire great art. All art (including game mechanics) is about story telling, just told in different ways.

Its important to start with writing, because writing has a great ability to convey thought, context & time. While visual art is far more immediate, not only in the speed of its communication (eg: looking at a picture is a lot quicker than reading a story), while visual art is limited to a snap shot of a single moment in time.

When you get multiple elements working together, its like a story telling symphony. Eg: When you look at a picture & understand why that character is doing what they are doing, why they are dressed the way they are & what their equipment does, that image means more to you, you become inspired!

And that’s what a good RPG book does, it inspires you, not primarily towards its own stories, but inspire you to create new stories! Understanding this point is key to RPG world building.

It’s been said that art and illustration seems to be a common stumbling block in RPG design and production. The argument is that if you want to pay an artist a fair price, something they can make a living from, then art seems to be too expensive for many indie publishers. Do you agree with this? Is this a real problem?

Yes, I agree that art is a stumbling block to most indie publishers, but I think it’s an oversimplification to boil it down to just money. I actually think the problem stems from two primary areas.

1) Indie publishers are often writers, not visual artists. Its far more difficult for them to gain the experience, skills & empathy they need to work effectively with visual artists. Unfortunately, there is just no easy way around this, working with & finding artists is a skill set, just like any other.

My advice to indie publishers, if you don’t have strong art direction skills, is to find an artists you can work with & stick to them. Send them lots of work, give them long deadlines, listen to them & foster that relationship. They will help to fill the skill gap that you have.

2) Money is also brought up a lot, & understandably so. Money has always been tight in all indie & artistic scenes.
I dare say this will always be the case.

To publishers I would advise you to primarily think about ‘style’. Find artists with a style that suit your needs, more detail does not equal better! But more detail always equals more cost. Also… let artists dictate their price to you, not you to them. You have the right to accept or reject their quote, they have the right to set it. You want artists to like you as a client, you want them to be thinking about your work while they do projects for other people, because your project is so much fun & your such a good client.

To artists… I can only repeat the words of Clint Cearley “Get good enough at anything & someone will pay you to do it”. And if you are a freelance artists, be sure to check out Noah Bradley’s ‘The Art of Freelancing‘.

Can you give us an example of Fragged Empire’s 3d6 Resolution System in practise?

Sure, lets look at how players can choose to open a locked door.
An example Youtube video can be seen here:

1) GM sets the scene/problem. In this instance “A locked door”.

2) Player defines what skill they are going to use & their approach.
Eg: Electronics to hot wire the control panel, Mechanics to disconnect its hydraulic locks or Programming to hack the interface.
Each skill will have a different result.

4) GM awards a Description Bonus or Penalty of up to +2 or -2 based on the players approach & skill choice.

5) Player rolls 3d6 +/- any bonuses or penalties they have, aiming to beat a set difficulty. Eg: 14.
High is always better.

6) Any roll of a “6” may be used for a special ability.
Eg: Re-roll any single dice from this skill roll.

7) GM defines the result, based on the Skill Roll total, chosen Skill & what Tools were used.

There’s a part of Fragged Empire that’s about genetic engineering. Is the game about exploring the issues around the controversial topic? What sort of adventure and campaign ideas would you like to see groups explore?

Yes, I am delving right into this one: exploring themes of genocide, creation of life, biological design, body modification, eugenics, scientific advancement at any cost, genetic erosion… all mixed in with a decent dose of cultural tension, exploration & no humans.

My go to adventure, when I am introducing new players to the game is called “Let Sleeping Gods Lie”. The party is a group of space salvagers who have discovered a inert, ancient organic warship, from the Great War (that was 100 years ago). They dock with the monstrous ship, not knowing if it is dead or hibernating…

My second go to adventure is a frontier defence mission. The party is a group of mercenaries, hired to defending a multiracial group of settlers from a threat they have awoken in the jungle. Lots of racial infighting & trying to decide if they go out to hunt the creature or build up the settlements meager defences.

Why do rpg’s need to defer from the d10 or the d20 system? It aggravating memorizing new systems.

An exclusive introduction to the stunning Fragged Empire RPG 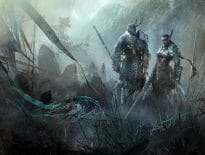 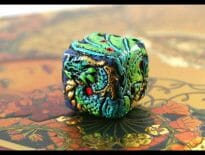