You are here: Home / Books / Comics / Dragon Ball’s Android 17 and 18 are called Lapis and Lazuli

Android 17 and Android 18 have had key roles in the Dragon Ball saga over the years. It looks like there’s a little more to their story to discover.

At the start of the month Dragon Ball creator Akira Toriyama was featured in a Q&A session in Saikyo Jump. There’s new material in volumes 4-6 of the new colour Cell arc. However, he also finally revealed the names of Android 17 and Android 18. Fans have often wondered whether Androids had any other name; or would take any other name.

Android 17 is called Lapis. After the Cell arc No 17 / Lapis becomes a park ranger and shows no mercy to poachers. In fact, he’s married to a zoologist with two adopted children! 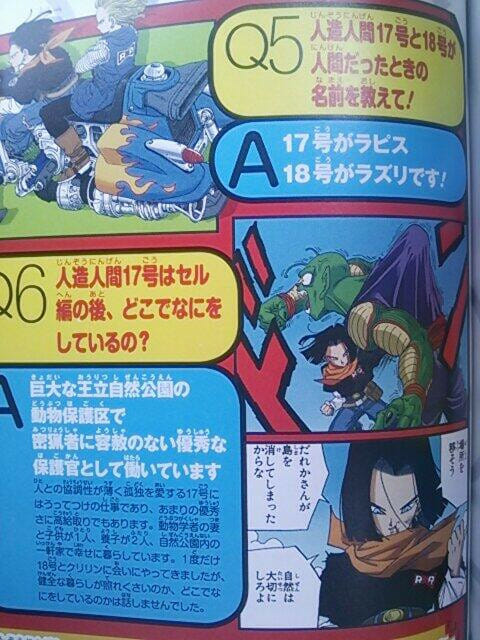 Comics Marvel’s big numbers
💰 Copper Coins 💰 Geek Native is an affiliate and may earn commission on purchases you make from third-party sites.
🍪 Privacy & Cookies 🍪 The site uses cookies to survive. By accessing the site, you agree to use your browser to control cookie use or take 1d4-3 privacy damage (tracking). If you defeat cookies via ad blocking, please consider the Patreon. An intro to cookies, and how to control them, can be found here. I Manage Cookies