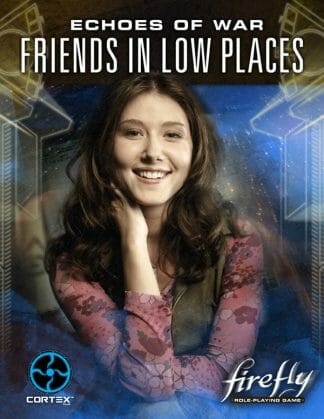 Echoes of War: Friends in Low Places on RPGNow

Firefly came and went like its insect namesake, but the series endures through a wide fan-base, comics, and various games. Rightly so, because in my opinion Firefly was a damned fine series that warrants the adoration it receives. Margaret Weis Productions has taken a stab at the ‘Verse before, presenting a Cortex-powered game based on the Serenity movie. Now, almost 10 years later, we return to the Big Black for another round, a renewed version of the system and a game based on Firefly the series.

As the Echoes of War adventures provide just a snapshot of the game proper – a taster, if you will – you might want to consider giving them a try before committing to the game itself. I’m going to review on that basis, while hoping to come back to you all soon with a take on Firefly itself.

Form
Echoes of War: Friends in Low Places is a 79-page PDF adventure and supplement, written by Monica Valentinelli, with art by Beth Sobel supplemented with images from the series. The supplement features a lot of artwork scattered throughout, which certainly makes for a more engaging and entertaining reading experience – and also likely makes it an unwise choice to print out on your home printer!

The adventure has a clean, readable format, with two columns of text on most pages. The book contains boxed text – entitled Masterin’ the Game – to provide insight and guidance on ways to approach the adventure or game in general. In the adventure, you get thoughts on how to handle the interactions of the player characters with plot and non-player characters. Outside the adventure, the boxed text considers things like adventure hooks, challenge difficulty and other key features a GM needs to consider when running the game.

All key ability checks and aspects appear bold in the text, for clarity, and the PDF includes a fully bookmarked table of contents.

Features
Echoes of War: Friends in Low Places is a quick start-style adventure, presenting 22-pages of basic rules and filling the following 57-pages with an adventure for you to try it all out. The whole supplement contains plenty of boxed advice on how to run the game and where helpful, offers up italicised examples of how a rule or activity works.

If you haven’t seen Firefly, essentially we’re looking at science-fiction with a strong Western frontier theme. Humanity moved into the stars and found a new system to inhabit, filled with potential. The ruling Alliance lavished the core worlds with all their tech and attention, leaving dozens of outer worlds and moons terraformed only enough for survival. Civil war broke out somewhere along the way, which the Alliance won – and the series, film and game exist within that post-war era of uneasy détente.

In the Game
The Firefly game, and Echoes of War: Friends in Low Places, uses the Cortex Plus system, an evolution of the Cortex system that has powered a number of games by Margaret Weis Productions.

Essentially, characters have various dice assign to their core abilities, skills, assets, circumstances and distinctions, and when they want to do something with a chance of failure, they construct a dice pool. Once they have the pool constructed, with some agreement from the rest of the group if any facets of the pool look a bit unlikely or suspect, the player rolls the whole lot and picks out the two highest values, combined, for their result.

In unopposed situations, the roll compares against a dynamic target number. Against robust opposition, the adversary might construct a pool of their own to set against the player’s result, but otherwise it might be something as simple as a Challenging d8 task to calm a Disgruntled Crowd of Civilians d6.

All in all, that’s about it. The rest comes down to working out valid dice for the pool, interpreting the result of a roll, and how it all adds up to an exciting game. At face value, the simplicity of the system comes across easily, with explanations and examples making it clear how each facet of a pool comes together.

Keeping to the themes of Firefly and Westerns in general, several elements have flavourful names. For example, in defining the difficulty of a task, the Gamemaster Sets the Stakes, and where the player rolls above the target, they have Raised the Stakes. When things go wrong, you can avoid getting Taken Out by accepting a Complication. If you do really well, you get awarded a Big Damn Hero Dice that allows you to step up with some thrillin’ heroics at some point in the future, expanding your dice pool.

Both players and GM have Plot Points as a currency to ease the way or add complexity. The GM starts with a Plot Point per player, while players earn them by giving in to the base motivations or doing something particularly dramatic or witty. With a few Plot Points at your disposal, you have the ammo to make your mark on the story. For example, while normal dice pool results end with the highest two dice, a Plot Point keeps an additional die to calculate your result. You might also choose to use a Big Damn Hero Dice, create a new Asset or make an existing one stick around for the rest of the session.

On the other face, the GM can create throw in a few fresh headaches. For example, if anyone rolls a 1 (termed a jinx), you can spend a Plot Point to create a Complication, even if they ended up winning the roll. You might alternatively choose to add a new or worsen an old Complication, providing more dice for your adversaries to use.

I suspect in the acting of trying to describe the system, I make it sound more complicated. At heart, the mechanics of Cortex Plus looks to up the story content of the game and reduce the number crunching. You won’t stagger under the weight of modifiers because you’ve sustained a nasty wound. Instead, the adversaries the GM plays get to take advantage of, and seek to worsen still, your Complication and add its dice to their pool.

Once you read through the rules (and maybe gone back over them to iron out any confusion), you can launch into the adventure.

The Lowdown on Low Places
I would highlight one thing immediately worth mentioning to the Gamemaster picking up this adventure – you don’t get any pre-generated characters. The book contains several pages of information detailing the background, motivations and Cortex Plus statistics of the non-player support and antagonists, but no pre-gens and no means to create new characters with the brief rules. If you want to play Friends in Low Places, you’ll need to either have the Firefly core game or purchase Firefly Echoes of War: Serenity Crew, which provides the TV series crew and twelve other ready-to-play archetypes.

I tell you this so as not to leave any surprises. I wouldn’t want you going out and getting this adventure following a read of this review, then cursing my name when you find out that you need to get something else to play. However, I don’t want you to take this as a criticism of the product. As part of the Echoes of War series of adventures, it does make sense to have a separate character pack – meaning that you don’t get the same material repeated across the series. I suspect you have more to moan about if Margaret Weis Productions tagged on a couple of dozen extra pages and charged extra for it.

At heart, the adventure provides a pretty simple set-up. Drawn into events through an old friend, the crew receive a request for help, an offer for work, and a counter-offer for assistance – some of which won’t necessarily prove compatible. Personal loyalties, greed, distrust of the Alliance, and strong moral values will all likely compete for attention – and across a mixed group of characters I can foresee some disagreement on the best way forward. In an ideal world, filled with shiny potential for adventure, you might find your crew polarising into all kinds of fun factions, both vocal and more secretive in their intent and approach.

Face value, I consider the adventure a great tool, first and foremost. The plot and characters provide opportunity for a fun adventure, sure enough – but the real value comes from looking through the sidebars and examples to see how they all hang together.

Whenever the adventure leads to some activity the crew might pursue, the text presents different options and ways to determine success (as players can, with agreement, combine core attributes and skills in a number of ways if they make sense). You get an overview of possible dice pools for both the players and the GM driven opposition, possible Assets available – like cover, obstacles, environmental effects or personality hooks, and possible complications. You can try and hoodwink the Alliance soldier, but if you roll a jinx, he might just uncover your outstanding warrant on the Cortex and impound your ship while confirming your details. Each activity also outlines possible results, depending on whether you failed, raised the stakes, or got an extraordinary success (rolling 5 or more higher than the opposing roll).

As well as an adventure in four Acts, the supplement includes an epilogue to tidy up a few loose ends, as well as four hooks for further adventures that continue on afterwards. Depending on how the crew aligned themselves and resolved the situation, they might find themselves in a whole load of trouble with all the wrong people.

Final Thoughts
The Echoes of War: Friends in Low Places adventure provides you with all the basic rules and plot line to get you started playing Firefly, without needing to get bogged down in a thick rulebook. By condensing the rules down to such a slim volume of basics, you can get up and running with a game after a quick read. The simple and supportive structure of the adventure ensures that Gamemaster has advice and examples to hand at every stage – and can learn on the fly.

With Echoes of War: Friends in Low Places and the Serenity Crew, an enthusiastic crew could get a whole bunch of gaming out of this one adventure. Even if your crew don’t pursue the hooks offered at the end, a wily GM can certainly improvise some more jobs and escapades. Depending on how your group feel, you can carry on from here into the Firefly game proper, or choose to follow through the whole Echoes of War storyline through the range of other PDF adventures available.

Having come into Cortex Plus cold, I now find myself itching to try it out not only in the ‘Verse, but across the other games in the Margaret Weis Productions stable.

My copy was provided for review. Echoes of War: Friends in Low Places, Monica Valentinelli, Margaret Weis Productions, $4.99 in PDF.

Hello I play a lot of games and like your music 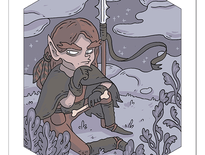