You are here: Home / Games / Tabletop & RPGs / How to get the exclusive Gaming in the ‘Verse: a Firefly RPG Preview 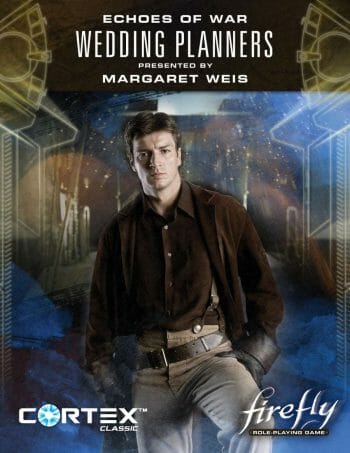 Update: There’s been a price drop on this preorder. If you’ve bought already; you’ll get credit.

Margaret Weis Productions announced an exclusive Gen Con product for their new Firefire license. You can pre-order and pick up at Gen Con or get it delivered to your door.

Gen Con will be held some 6,043 klicks from this blogger and is a world away. What can I do to get my hands on this Firefly RPG goodie? What can you do?

The good news is that MWP have struck an exclusive deal with DriveThru RPG. You can now pre-order an electronic edition of the Gaming in the ‘Verse: a Firefly RPG Preview. You won’t be able to get this in stores anywhere else.

All game material provided in Gaming in the ‘Verse: Gen Con 2013 Exclusive will employ the Cortex Plus mechanic. The estimated release for the Firefly RPG is Winter 2013.

There are two words rattling around in the summary above that you don’t usually see together. The first is “preview” and the second is “exclusive”.

Here’s the run through of how those two meet in the middle.

The “preview exclusive” will be a combination. It’ll contain stand-alone product that you’ll not be able to get elsewhere. It’ll also contain abridged preview material so you’ll get a strong idea of what the Firefly RPG will be like.

This will be a Cortex Plus product based on the Firefly RPG. I suspect it’ll also help fans, gamers and MWP put some distance between the Serenity RPG and the new Firefly RPG. I can see why fans wonder what the difference is, although it has been explained, as in gamer terms we might think of the TV show and movie as being from the same “setting”.

The preview contains some adventures; “Wedding Planners” and “Shooting Fish”. The plan is that both adventures will be made available later. This may mean they’re not exclusive but the Gen Con pack is the best value method for getting hold of the collection.

I reached out to Monica Valentinelli, the brand manager for the Firefly RPG, for some insight on Gaming in the ‘Verse and received a characteristically helpful response.

“Gaming in the ‘Verse is a way to sample specific sections of the Firefly RPG and play some fun adventures right away. The fan feedback has been overwhelming and it’s our hope that you’ll be excited to play Firefly whether you’re new to gaming, Cortex Plus, or not,”

“By giving you a mixture of polished adventures and works-in-progress, it’s my hope that this’ll spark many conversations so we can continue to shape the Firefly RPG to meet and exceed expectations.”

Grab the Gaming in the ‘Verse: a Firefly RPG Preview from DriveThru RPG.

How to get the exclusive Gaming in the ‘Verse: a Firefly RPG Preview