You are here: Home / TV / Doctor Who: Brand new character announced but he is a Companion?

The BBC have announced this morning that Samuel Anderson is joining Doctor Who. He’ll play a character called Danny Pink who works at Coal Hill School.

Fans should know Coal Hill School for two reasons. Last year it was shown that Clara Oswald works there. In the very first episode of Doctor Who the teachers Ian Chestertone and Barbara Wright also came from Coal Hill.

Samuel said in a press release;

‘I was so excited to join Doctor Who I wanted to jump and click my heels, but I was scared I might not come down before filming started! It’s a quintessential part of British culture and I can’t believe I’m part of it. It’s an honour to be able to work alongside Peter Capaldi and Jenna Coleman and I can’t wait to show people how my character becomes involved with such a fantastic duo!’ 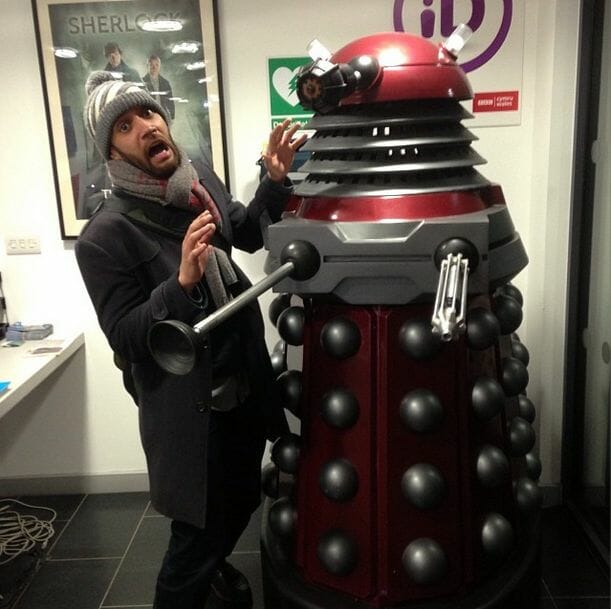 The BBC have said that Danny Pink will be a recurring character in series 8. They didn’t use the word “Companion” though. In fact, in typical style, Mr Moffat teased with;

‘… And very soon now, Sam Anderson as Danny Pink will be entering the world of the Doctor. But how and why? Answers are coming later this year in Peter Capaldi’s first series of Doctor Who!’

Today Samuel Anderson Instragammed a picture of himself with a Dalek, joking that it was BBC Wales security. Fans will notice the Sherlock poster in the background too.

Doctor Who: Brand new character announced but he is a Companion?

Music For your RPG night: The music of Erang

PC Hitchhiker’s Guide to the Galaxy web game gets 3…
💰 Copper Coins 💰 Geek Native is an affiliate and may earn commission on purchases you make from third-party sites.
🍪 Privacy & Cookies 🍪 The site uses cookies to survive. By accessing the site, you agree to use your browser to control cookie use or take 1d4-3 privacy damage (tracking). If you defeat cookies via ad blocking, please consider the Patreon. An intro to cookies, and how to control them, can be found here. I Manage Cookies