You are here: Home / Movies / Will there be two Ant-Men in Ant-Man?

Many years ago over at SuperHero Hype Edgar Wright talked about Ant-Man, a film he’s wanted to do for a while, and mentioned the idea of having the first Ant-Man Henry Pym and the second Ant-Man Scott Lang.

Lang is a reformed thief and electronics expert whereas Pym is pretty much an obsessed scientist.

Well, the thing is that what we want to do, the idea that we have for the adaptation is to actually involve both. Is to have a film that basically is about Henry Pym and Scott Lang, so you actually do a prologue where you see Pym as Ant-Man in action in the 60’s, in sort of “Tales to Astonish” mode basically, and then the contemporary, sort of flash-forward, is Scott Lang’s story, and how he comes to acquire the suit, how he crosses paths with Henry Pym, and then, in an interesting sort of Machiavellian way, teams up with him. So it’s like an interesting thing, like the “Marvel Premiere” one that I read which is Scott Lang’s origin, it’s very brief like a lot of those origin comics are, and in a way, the details that are skipped through in the panels and the kind of thing we’d spend half an hour on.

Yesterday, on his blog, Wright posted a single word post – along with an image. He said Homework and shared the image of Ant-Man from the animated series Avengers: Earth’s Mightiest Heroes called “To Steal an Ant-Man”. 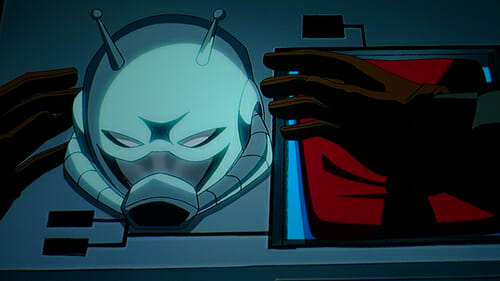 In that episode Scott Lang travels back from the future, steals the original Ant-Man equipment and uses it to commit crimes.

Combine these teasers with Marvel Studios President Kevin Feige once describing the movie as an heist film and the mind begins to wonder what Edgar Wright has in mind.

Could this be a time travelling episode? Two Ant-Men in Ant-Man? Or just some misdirection to energise fans? What do you think?

Will there be two Ant-Men in Ant-Man?

Tabletop & RPGs Avalanche!: A Review of The Mysterious Peaks of Ba…

Tabletop & RPGs Treasures of the Ninth World: A Review of the Cyph…
💰 Copper Coins 💰 Geek Native is an affiliate and may earn commission on purchases you make from third-party sites.
🍪 Privacy & Cookies 🍪 The site uses cookies to survive. By accessing the site, you agree to use your browser to control cookie use or take 1d4-3 privacy damage (tracking). If you defeat cookies via ad blocking, please consider the Patreon. An intro to cookies, and how to control them, can be found here. I Manage Cookies