You are here: Home / Games / Tabletop & RPGs / Avalanche!: A Review of The Mysterious Peaks of Baranthar 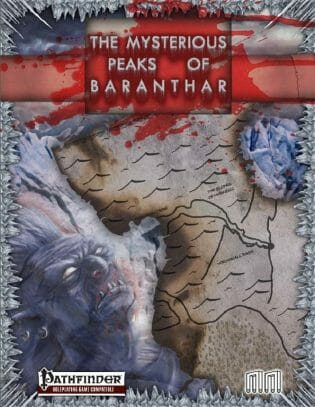 Scaling the sheer cliffs of the Baranthar Mountains, falling to your death might prove the least of your worries. The elements and unforgiving crags of the Baranthar peaks may prove as dangerous and uninviting as the struggling and desperate settlers that once called it home.

However, the evil that lies at the summit poses a terrible threat bound up in foul and bloody sorcery, so someone must right wrongs, batter the beastly, and secure crampons for a long, hard ascent.

Form
The Mysterious Peaks of Baranthar is a 28-page Pathfinder Roleplaying Game Compatible Adventure, written by Mike Myler, and published under the Open Gaming License. The adventure was written with four to five characters of 5th – 6th level in mind, though a Gamemaster can obviously tweak and adjust this to suit.

The adventure includes four colour encounter maps with tactical grids, one location map, and several illustrations pertinent to the encounters faced by the adventurers.

The adventure includes content of a mature nature, describing certain acts of torture – though not in bowel-curdling detail, and therefore would need adjustment for a gaming group including young and/or impressionable players.

Features
The adventurers come across various signs of unrest, deprivation, and disease in the craggy, snow-filled foothills of the Baranthar Mountains. A recovered Journal revealed that a Half-Orc called Phot play some part in the release of a evil entity called Grualroth. An element of that evil entities masterplan lies at the heart of the mountains and the words of the now expired Phot beseeches the reader to do something about it.

Unless you have played out the events of the previous adventure in the series, The Clockwork Wonders of Brandlehill, the Gamemaster will have to do a bit of work to engage the player characters. Without the previous adventure, even the plot hook of the Journal won’t exist without preparation.

The peaks do not offer a warm welcome to anyone. The weather and hostility certainly don’t add to any kind of welcome, and the adventure itself doesn’t offer much in the way of hooks or reward. I think a solid collection of rumours, alternate patrons, and hooks would have been valuable here – though a capable Gamemaster will know the party best and can tailor an appropriate lure.

The first sixteen pages include a table of contents and an introduction, followed by the bulk of the adventure. Much of this covers the ascent up the side of the mountain, encountering an Alchemist with groupies, diseased Dire Wolves, Ice Trolls, savage winds, avalanches, and other restless guardians.

The adventure suggests only one navigable path and piles high difficulty skill checks on any attempts to ascend another way. The evil at the peak has generated a terrible snowstorm – and this makes any Flying ascent profoundly dangerous. I feel that a more open view for characters to come up with a plan of approach would have avoided such a sense of linearity – and still include the encounters offered. Gamemasters may want to exercise some creative improvisation and finessing of the listed course of events.

Given that the adventure represents a string of outdoors encounters, it does make sense to scotch attempts to circumvent them with a Flying spell obscenely difficulty. However, if you as Gamemaster can come up with a more constructive, imaginative or original approach than just a snowstorm to achieving this, I would certainly recommend you try it.

The supplement offers an interesting diversion from skill checks at one point by suggesting players might ease their characters climb if they can construct a column of dice – from d4 through to d12 – in 10 seconds or less. Success offers a bonus, failure a penalty – though it all leads back to skill checks in the end. I really liked this idea as a way to build some slightly out of the ordinary fun into the game session with some, but not overly significant, impact on the game.

Close to the peak the challenge increases and the characters witness the depravities of evil behind the demonic ritual in progress. Throughout the adventure, the character party will actually find they often have an option beside combat or might have the chance to do the right thing, and that does make a nice change from a full tilt hackfest.

The conclusion saves the day, but leaves threads hanging for further adventure. A more conclusive and final resolution would have been appreciated for anyone playing this adventure as a one off. As the adventure starts with advice on how to involve the characters who didn’t complete The Clockwork Wonders of Brandlehill, it would have seemed a sensible addition to consider those whose involvement will end here.

The module rounds out with statistics for all the major characters and adversaries, a new magic item, and the various encounter maps – which would look great blown up to A3 for immediate use on the tabletop.

Final Thoughts
The Mysterious Peaks of Baranthar provides considerable challenge for a party of adventurers with some experience under their belt, pitting them against dangers of the environment and climate, as well as the more obvious and traditional adversaries.

Written for, and best suited as, continuation of a series, the Gamemaster of this adventure will need to perform some additional preparation and leg work to accommodate adventurers who start here or will play this as a one-off.

The unusual environmental challenge and included encounter maps provide a positive for this adventure – especially as you get a printer-friendly version thrown in for the cost. More hooks, broader consideration of approach, a strong alternate ending, and maybe a random encounter table keyed to the sorcerously tortured environment would all have added value – but this stands up as a fine and competently written adventure.

Avalanche!: A Review of The Mysterious Peaks of Baranthar 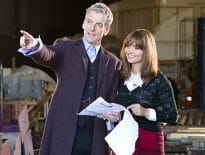 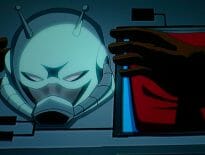 Movies Will there be two Ant-Men in Ant-Man?
wpDiscuzComment Author Info
Loading Comments...