You are here: Home / Geek Stuff / Art / Grimterra – a TGC that transforms your imagination

I can’t draw. I struggle to draw a stickman. It’s true. Perhaps that’s why I’d very much love for someone who could draw to transform my ideas, my doodles, by child-like sketching into awesome gamer art.

Grimterra does exactly that. This is a new trading card game that takes your art and transforms it. Don’t believe me? In this interview with David Ruiz and Robert Toledo from Grimterra about the game you’ll find plenty of examples of fan submitted art becoming game art. For each picture you’ll see the before and the after. 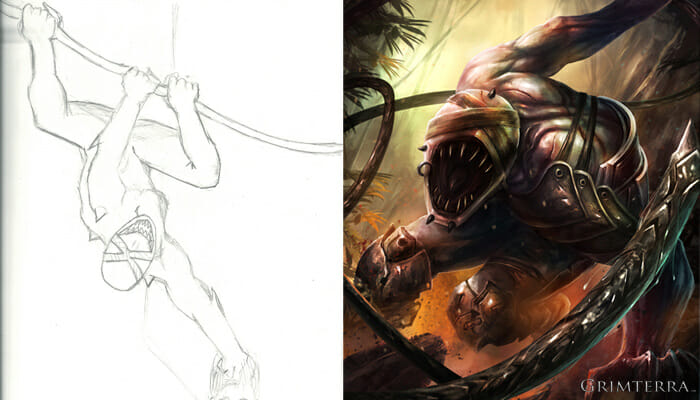 What’s the elevator pitch for Grimterra? If you only had 90 seconds to persuade a gamer to give the card game a try what would you say?

David: To gamers I would say, “Grimterra is a TCG where players can submit their own drawings, and have them re-imagined by professional artists as playable characters in the game. You then use your characters to fight against other players in gladiator style combat. You build your own deck, level up your characters, unlock special powers and coordinate their attack strategy. It’s also free to try by downloading one of our PDF starter decks. ” 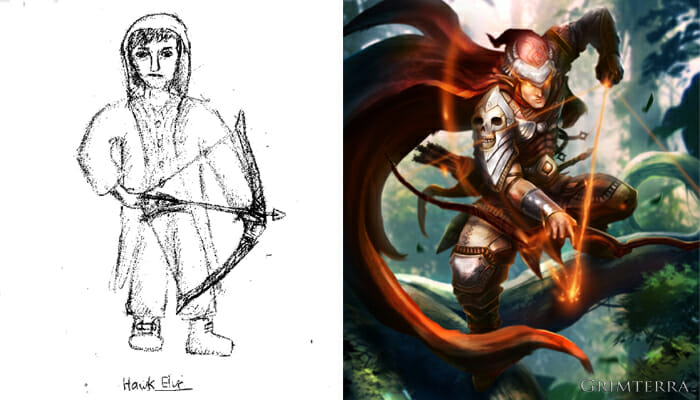 How did the decision to take fan created art and transform it into official Grimterra characters come about? Who’s was it?

David: I got the idea when my nephew showed me some monsters her had drawn. Each one had a name, stats and a background. I was impressed with the level of detail he put in so I wanted to take it a step further and turn his drawings into something he could play with. This way, they wouldn’t just be drawings anymore, they would become “real”. That’s when I got the idea to redraw his monsters and make them into a card game. After that, I couldn’t help but think that other kids, including myself, might like the idea of having someone re-imagine their drawings into something they could play with too. 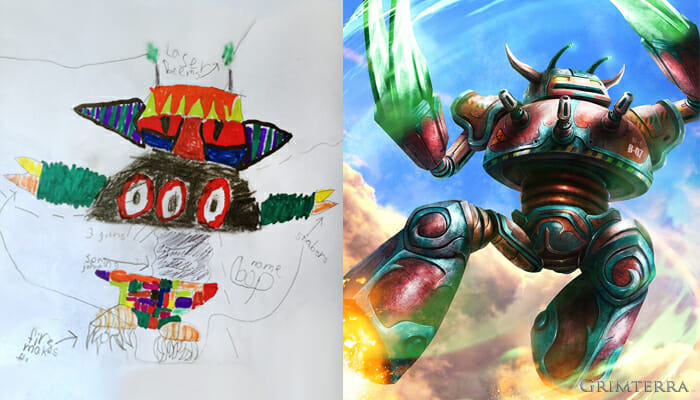 Amazon has a recommendation engine that says “As you bought these books you might like this one…” Could you be a human-Amazon-engine and say which card games you’ll suspect Grimterra fans will already have bought? For example, will gamers with Magic: the Gathering, Rage and the Legend of the Five Rings CCG in their cupboard likely to enjoy Grimterra?

Rob: We definitely have deck-building strategy elements that Magic: The Gathering players will appreciate along with frenetic war-style combat Rage players will enjoy. The bluffing dynamic we’ve built into combat reminds me of the Android: Netrunner card game – there will be plenty of points where you’ll feel so smug about the card you got your opponent to play (or waste) with a bluff attack. Lastly, I’d say the optimization and skilling up of characters reminds me of managing a champion in League of Legends/DotA- so even PC MOBA players will find pieces they’re familiar with in Grimterra. But overall our game shares certain mechanics that really resonate with gamers: deck building and dueling. There’s a certain pride one feels when you build your own deck and beat someone with it. Now imagine how you’d feel if you did it with characters that you originally drew. 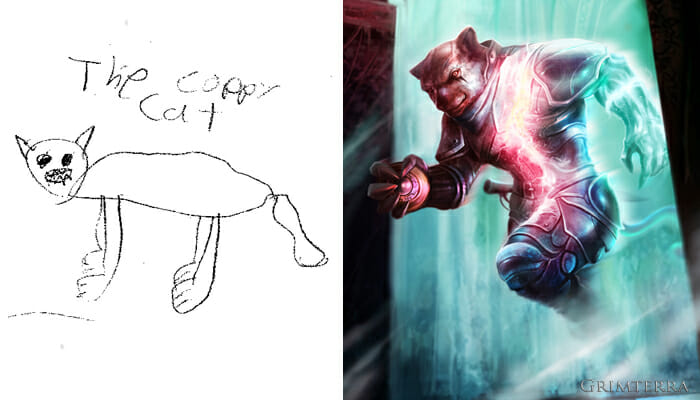 How long does it take to play a game of Grimterra?

Rob: You should be able to fit a Grimterra game into a 20-30 minute slot depending on whether you’re playing a defensive opponent or a very aggressive attacker. We designed the game to be fast enough for a lunchtime play session and viable for tournament style events.

CCGs seem to both suffer and benefit from the “Buy More Cards” syndrome in that it takes a combination of luck and money to build the best deck. Is that something you’ve embraced with Grimterra?

David: (great question!) Grimterra takes a slightly different approach to this. My biggest issue with CCGs is the amount of “throwaway” cards that saturate each set/expansion. As a result, players are forced to spend a lot of money buying in bulk in hopes that they get “good” cards. This forces players who don’t have any spending power to settle on using sub-optimal cards. In Grimterra, we try to make every card a good one. This gives players the flexibility to create powerful decks without being forced to spend big on a card hunt to stay competitive. If players want to buy in bulk, it should be because they are looking for specific cards to complete their deck strategy, and not because there’s only a small percentage of useful cards in the set.

As for the collector in us, I believe we need that combination of money and luck for there to be a reward. There’s a sense of gratification when finally getting that hard to find card. Therefore, character cards will be subject to limited prints based upon their popularity and the direction of the game’s story. I like to think of Grimterra characters as comic book characters. They will have a “first appearance” but not all of them will live forever. Some may die, retire or become more (or less) powerful. So keep an eye out for those “first appearance” character cards, because we may literally never print them again.

"Where everybody knows your game"
Art

Grimterra – a TGC that transforms your imagination 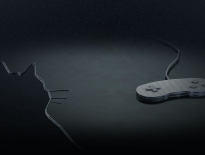 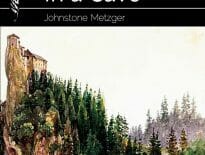