You are here: Home / Games / Tabletop & RPGs / Release the Beast: A Review of AGE Bestiary – Beastmen 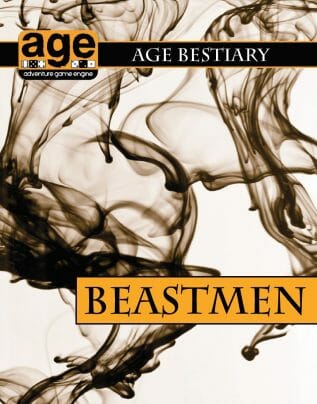 Creatures born of man and beast fill legends and contemporary media alike with monsters of rampant ferocity or unexpected champions of surprising character (often with something of a Red Shirt mentality about their prospects of surviving until the end of the book / movie). You can see examples all over the place – whether Mr Tumnus of the Chronicles of Narnia or the centaurs of Harry Potter’s Forbidden Forest in the present, back through history to the Minotaur in the Maze of Minos, the depraved Satyrs, or the ferocious Dracaena – half-woman half-dragon – of legend. The juxtaposition of man and beast provides a channel for stories that consider the dark side of humanity.

AGE Bestiary: Beastmen focuses on this staple of storytelling and role-playing, through the mechanics of the Adventure Game Engine – the universal crunch behind the Dragon Age RPG and Fantasy AGE How can you set about bringing these primal hybrids into your gaming world of choice?

AGE Bestiary: Beastmen is an 8-page PDF in US Letter format. The first page displays a generic image common to this range of AGE supplements and half of the last page given over to credits and the AGE logo. Another page worth of space features some excellent pencil-rendered illustrations of various beastmen.

The supplement adopts a two-column format with a black/white/orange colour scheme that matches the AGE system logo. The supplement uses the same stat block format that appears in Dragon Age, Midgard and similar game supplements using the AGE.

AGE Bestiary: Beastmen starts along the same lines as this review – considering the role of the beastman in myth and contemporary media. As a Gamemaster, the mention of beastmen immediately makes me think of Warhammer Fantasy and Runequest. On a scale between one and the other, AGE Bestiary: Beastmen would fall in the camp of the latter – though you could absolutely use the same rules if you felt the desire to bestow the taint of Chaos upon your game.

As well as examples for Greek legend, the supplement cites modern references in Lovecraft, Howard and Wells, with the likes of Deep Ones, snake men and the monstrosities on The Island of Dr. Moreau.

After considering the background of beastmen, their role in games contemplates how their appearance might affect or surprise players, depending on how you deploy them in your adventures. While beastmen can easily serve as sword-fodder and ferocious minions, many legends tell of curses that trap innocents in beastly form. Such a predicament might give players pause – perhaps accentuated after a first encounter where the enemy transform, in death, to their wretched mortal forms. Are these monsters or the ensorcelled inhabitants of that settlement you rested in a couple of days ago?

Most of these creatures would pose a challenge to only 1st level characters, though the Minotaur and the Dangerous Beastman would provide a deadly encounter for a such a group, better suited to 2nd or 3rd level characters. However, if you apply Elite, Heroic or Epic modifications to these base creatures, their wallop potential will escalate. The text also suggests applying aspects of character class powers to generate leaders, champions, shaman and other personalities with the talents to set them apart.

The last 2-and-a-half page consider Beastmen as characters, firstly as a curse that might be broken, and secondly as a natural aspect of their heritage, like the Ducks of Runequest or the myriad animal-hybrids of the aforementioned Chronicles of Narnia.

The Cursed Beastman represents the state as a character enters play, providing an immediate motivation for adventure in the long term, seeking a cure and trying to survive the stigma of an intolerant and wary society.

The Tribal Beastman adapts the types featured in the previous section as a base stock on which players can add the standard classes. To allow maximum flexibility in mirroring specific types of animal I think it would be advisable to use the point-based character generation system from Dragon Age: Set 2, so that a player can keep to theme rather than randomly generating some anachronistic benefit (like Mr Tumnus with a Might Focus).

Reading through this supplement, I immediately saw the potential – possibly because I read Porphyry – World of the Burn not so long ago that features animal people as a character alternative. Also, the options presented make for an immediately useful tool-kits for someone wanting to run a Chronicles of Narnia game – as the various beastmen cover a lot of the options available for humanoid characters, both PC and non-player character.

My only minor criticism of this supplement would be the occasional proof-reading oversight that sticks out like a sore thumb:

This form grants them physical power, but brings social ostracism at worst and a life spent hunted like a dangerous animal at worst.

Must be tough to be a Beastman if ‘at best’ is never an option!

Small errors aside, I really enjoyed reading the Bestiary and saw immediate potential both for introducing Beastmen into my Dragon Age game, but also for one-shots using the AGE system in different settings. I can see myself adapting adventures from other games or adapting storylines from books and movies – and the AGE system is simple enough to pull that off.

Based on a copy of AGE Bestiary: Beastmen provided for review purposes.

Cayzle Hi! The supplement specifically picks out the Centaur to represent the tauric subset of beastmen. However, based on the general focus of the Wemic, I’d suggest you take the Beastman, Dangerous as you best bet from this supplement. Or you could use the Scorpion Guards from the “Tomb of the Seeress”. In either case, add in an attack with Spear (Attk +STR, Dmg 1d6+3+STR) and  in the case of the Scorpion Guard, drop the Sting attack.

Release the Beast: A Review of AGE Bestiary – Beastmen 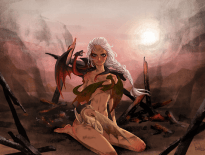 Art The Mother of Dragons illustration that inspired f… 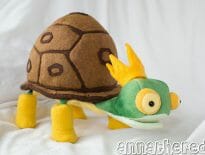