You are here: Home / Books / Comics / A review of Monster Massacre 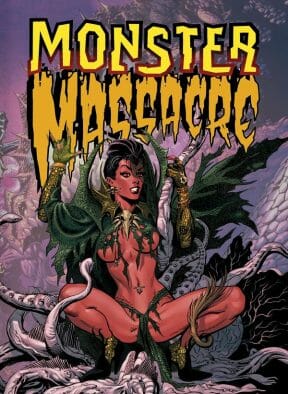 My favourite story in the monstrous anthology is “Pair of Rogues” from Ron Marz and Tom Raney. It features one sexy fairy maiden but there’s a twist in the plot and she’s more than just fan service. The encounter reminds me of a Pathfinder encounter waiting to happen.

Monster doesn’t just mean Cthulhu-like spawn (though watch out for those) and that’s a conclusion many of the writers carefully explore. Monster doesn’t always mean scary either; expect some silly in the Monster Massacre. After all we do get a Sharky story or so.

It’s not just the stories that run a wide range of styles; the art does too. We’ve got everything from high impact, high gloss productions to black and white and to the four-colour style that wouldn’t seem out of place in the 60s.

I enjoyed Monster Massacre. I enjoyed some of the stories more than others and some I found myself flipping through. This is a book that strikes me as a good gift and a good tabletop piece for gamers. If you’re needing to distract a friend while you play a few more minutes of computer game in a hunt for a save point then I think handing them Monster Massacre to flick through would be perfect.

Monster Massacre works very well as an anthology too. It’s a great way to introduce yourself to a talented range of artists and writers.

A review of Monster Massacre

Geek Stuff Teenage Mutant Koopa Troopas
💰 Copper Coins 💰 Geek Native is an affiliate and may earn commission on purchases you make from third-party sites.
🍪 Privacy & Cookies 🍪 The site uses cookies to survive. By accessing the site, you agree to use your browser to control cookie use or take 1d4-3 privacy damage (tracking). If you defeat cookies via ad blocking, please consider the Patreon. An intro to cookies, and how to control them, can be found here. I Manage Cookies