You are here: Home / TV / Theories: Who is the John Hurt Doctor?

This post contains speculation and if you have not seen The Name of the Doctor it will contain spoilers.

Some of the speculation in this post includes links to media coverage which claim exclusives and insider knowledge. You may consider these spoilers but experience shows that there will be a dozen pieces of conjecture, misinformation and Chinese Whispers to for each piece of real insider knowledge. Consider all such posts with a pinch of salt. 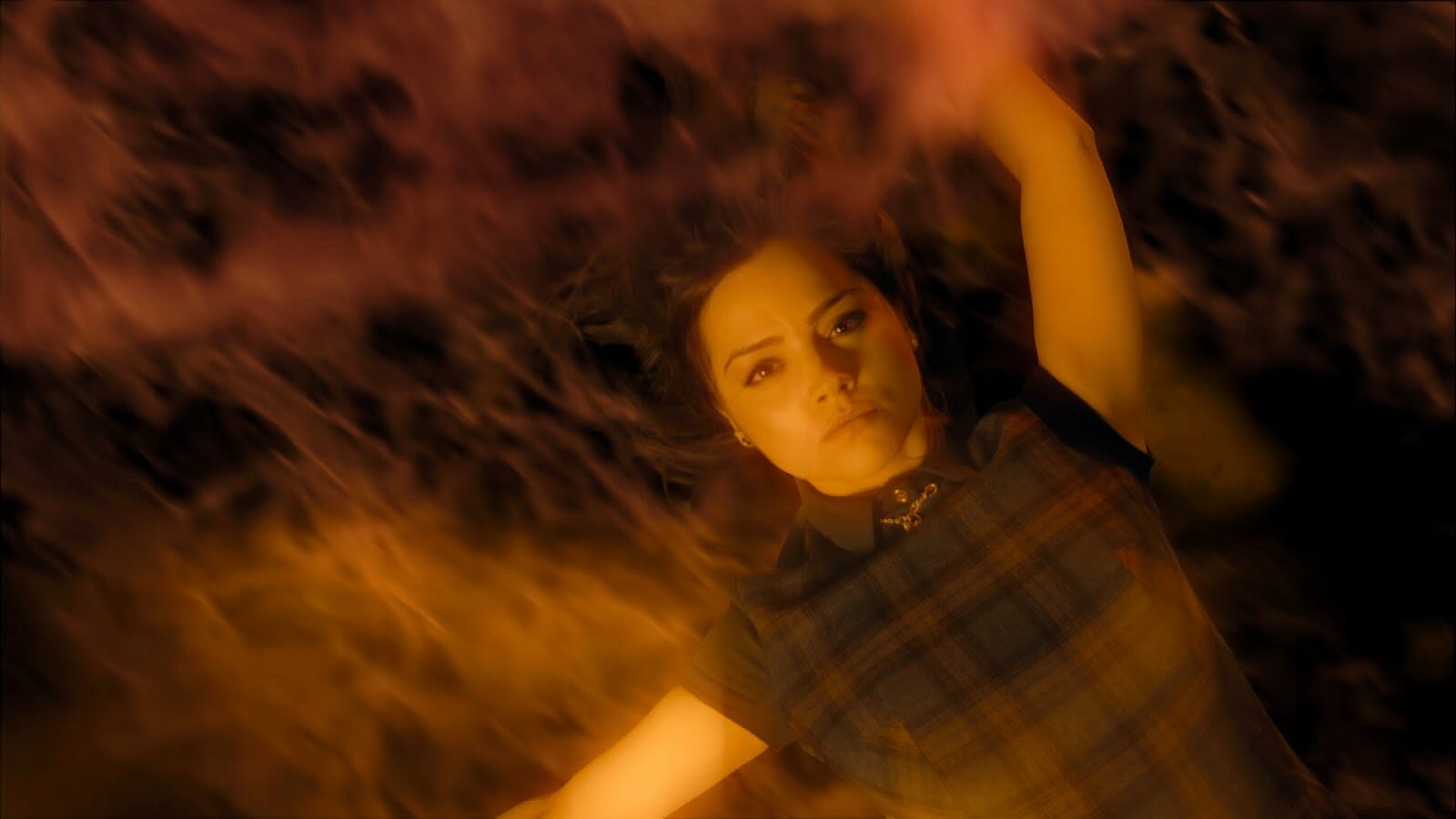 In the scene just before the companions, the Whispermen and The Great Intelligence entered the tomb TARDIS it was explained that the Doctor would have many names before the end; The Storm, The Beast and the Valeyard.

The Valeyard is a character from Classic Doctor Who. He is believed to be an amalgamation of the Doctor himself from between his incarnation.

At the end of the episode the eleventh Doctor followed Clara Oswald into his own timeline in order to rescue her. By that point she had seen all the other faces of the Doctor. Just as she is about to depart, escaping the timeline, she sees someone else. The figure is looking away at first but then turns around. It’s not a face of the Doctor that we’ve seen before.

Doctor: I said he was me, I didn’t say he was the Doctor.

John Hurt Doctor: What I did, I did in the name of peace and sanity.

So could John Hurt be playing the Valeyard? That might fit the “he is me but not the Doctor” concept. This character may be the same Time Lord but a regeneration who did not use the Doctor alias.

Can John Hurt really be playing another Doctor?

There is a large part of the current Doctor’s life that we know happened but know little about; The Time War. The Doctor played a significant role in this cosmic event, he may even have been a General in the Time Lord armies, but we know little of the details.

More recently, in the episode Hide, the psychic Emma Grayling warns Clara Oswald that the Doctor (the eleventh) has a sliver of ice in his heart.

Could it be that there is a whole, lost and forgotten Doctor from The Time War? Is this regeneration of the Doctor that sliver of ice from the Time War? Let’s look at the clues.

The clothes that John Hurt’s The Doctor wore did look like a combination of the eighth Doctor and the ninth. This fits the Time War period exactly. 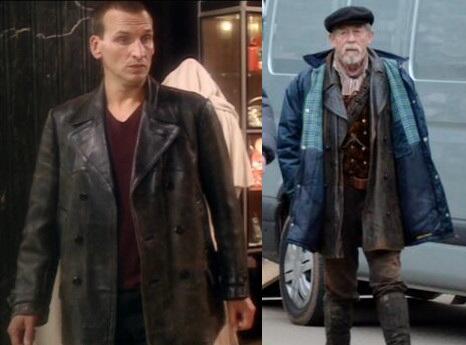 Could there have been a reincarnation between after that we don’t know about? That would make Christopher Eccleston the tenth Doctor, David Tennant the eleventh Doctor and Matt Smith the twelfth Doctor.

Some Who fans might be tempted to rule out a missing regeneration out on the grounds that Time Lords only get 12 regeneration cycles. That piece of mythos, though, has already been wiped away in The Sarah Jane Adventures. We didn’t get much insight into why. We just know it doesn’t apply to the Doctor any more.

Significantly, there are comments that apparently come from John Hurt himself and repeated in The Sun newspaper. The Sun isn’t always known for getting this sort of detail right and they cite unnamed sources so its best to apply some caution.

According to the Sun’s report Hurt himself said he would be playing “part of the Doctor” in a “kind of trinity” with David Tennant and Matt Smith. That report was published on the 10th of May.

In the same article, The Sun’s unknown source claims that Hurt will be playing a regeneration of the Doctor which has been forgotten about.

However, the same source seems to have missed the possible change around the Doctor’s regeneration limit. They say;

It also means the Doctor’s time is running out as he can only regenerate 12 times.

After that the source gets back on track with this story, suggesting;

The reason the Doctor has forgotten his ninth incarnation will become clear but it’s to do with the Time War and his shame over his behaviour in it.

We’ll know that The Sun’s source had it right if there’s a scene with the tenth and eleventh Doctor using their sonic screwdrivers to confirm who Hurt’s character is.

It’s worth considering that John Hurt’s regeneration, like the Valeyard, might be the same Time Lord but not really “The Doctor”. Same man, different name. True, the text at the end of The Name of the Doctor clearly introduced him as The Doctor but is that a simplification? Could John Hurt’s TIme Lord have another name?

Steven Moffat, the writer behind all of this, foreshadowed some of this way back in the fifth season of new Doctor Who. In the episode The Beast Below an angry and upset Doctor discussed doing something so horrible that he would no longer be the Doctor.

Here’s a quote from the scene;

The Doctor: [Adjusting machinery] The worst thing I’ll ever do. I’m going to pass a massive electrical charge through the Star Whale’s brain – should knock out its higher functions, leaving it a vegetable. The ship will still fly, but the whale won’t feel it.

The Doctor: Look, three options: One, I let the Star Whale continue, in unendurable agony for hundreds more years; Two, I kill everyone on this ship; Three, I murder a beautiful, innocent creature as painlessly as I can. And then, I… I find a new name, because I won’t be The Doctor anymore.

The Doctor: Nobody talk to me. Nobody 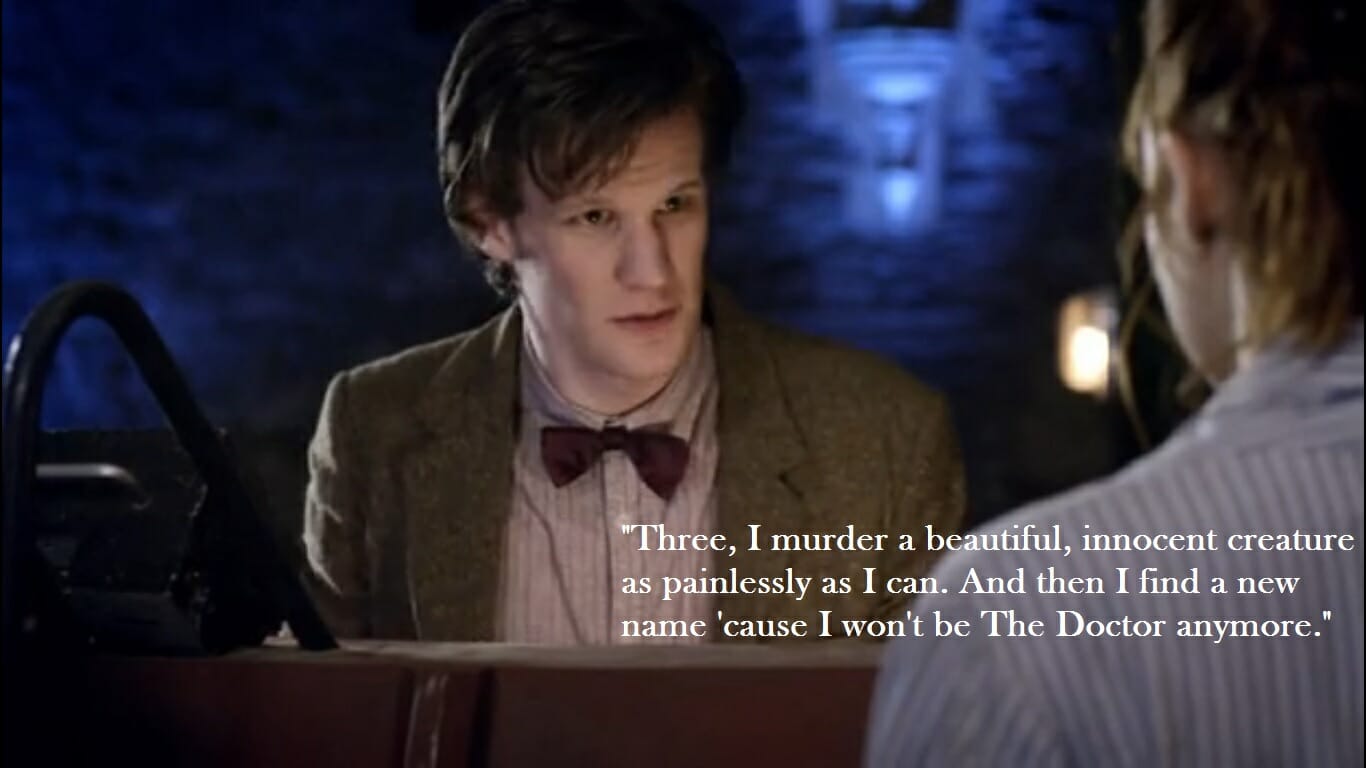 So, John Hurt’s The Doctor may be the 9th regeneration of the Time Lord who generally uses the name “The Doctor”. If this theory is correct then we’ll have to see whether he’s the actual 9th, an older 8th or a forgotten incarnation with a different name like the Valeyard.

Theories: Who is the John Hurt Doctor?

TV The Name of the Doctor trailers and pictures
💰 Copper Coins 💰 Geek Native is an affiliate and may earn commission on purchases you make from third-party sites.
🍪 Privacy & Cookies 🍪 The site uses cookies to survive. By accessing the site, you agree to use your browser to control cookie use or take 1d4-3 privacy damage (tracking). If you defeat cookies via ad blocking, please consider the Patreon. An intro to cookies, and how to control them, can be found here. I Manage Cookies