This is my third trip down to see The Gadget Show Live and that allows me to see how the event has evolved over the years.

The event is a large expo; six great halls in the Birmingham NEC filled with stands and stalls that showcase some of the latest tech (and the occasional future tech), accessories and games.

There’s also the super theatre where the stars from Channel 5’s The Gadget Show put on a very good show and entertain auditorium after auditorium of fans.

The first thing I’ll say about the Birmingham NEC is that it’s wheelchair friendly. There was one in our group and we had no problems. Lots of chair users know this and go to the event.

This does mean if you’re taking your wheelchair in to see the show then book ahead and get there early otherwise all the wheelchair space will get used up and you might find yourself tucked away in a corner somewhere.

This year we had Jason Bradbury, Jon Bentley and Pollyanna Woodward present the live show. That’s not as many as there have been in the past and the show did, perhaps, feel a little less energetic – but it’s important to put that in context.

Previous shows have been hugely energetic with tag teams of presenters charging around. This year was simply energetic as the trio ran around, mixed with the crowd and handed out free tech loot to lucky punters (sometimes brave punters) in the crowd. Add explosions and you’re sorted.

It’s an hour-long and worth your time. In fact, I think if you travel to the expo and don’t make it into the Super Theatre then you may be disappointed.

Last year they had some flying gadgets in the live show which you could then go see in the expo and this year it was the GoPro in the spotlight. It’s much more engaging seeing which clips of the TV’s Gadget Show were filmed on a GoPro and then turning up at the GoPro stand to figure out whether you can afford one than just walking by the GoPro stand and wondering whether you know anyone crazy enough to strap the device on and bungee off a tower.

So, what about the expo?

It was busy. Importantly; it was well staffed, clean, laid out and there were plenty of food stands. The catering trade has clearly gotten wind that this is a good show to attend. Just keep in mind that it’s not cheap; noodles and water came to nearly £9.

I enjoyed the expo. It was a little busy for my tastes but could clearly hold far more people without it getting overcrowded.

There was no sign of Apple. No official Apple presence is to be expected but previous years have seen third party traders trying to sell iPads or accessories.

Not so this year. There were some companies selling specialised stands and gripping devices in general for tablets but if you wanted to rummage up any iPhone accessories and the like then you’d have to root around among the smallest of trader stalls.

There was some presence from other PC companies. Acer was there and so was Alienware. Alienware’s racks of gaming PCs and laptops are always popular, always have a queue and worth a quick shot.

I was surprised Acer had so many “traditional” laptops and PCs on display. I was expecting to see lots of tablets and hybrid devices but that wasn’t the case.

Sony was doing very well with stands in a few places. One stand was a bus that had parked itself to promote the Xperia smartphone range but they had an additional stand that let people get hands-on with the Xperia tablet and it’s surprisingly light. I watched as people dropped Xperia phones into buckets of water to test Sony’s water resistance claims.

It seems to be something you need to try before you either believe or care about it. I noticed a number of families with small children seemed particularly pleased to see just how robust the smartphones seemed to be.

The mobile phone operators have retreated – with the exception of ee. This is no surprise as ee is the only network to have a 4G license in the UK right now. It’s the only network that could really hold its head up high and the likes of o2 and Vodafone must be fuming.

Virgin Media was there, true, but with plenty of emphasis on their integrated offering rather than just trying to sell BlackBerries on contract.

The two new major categories this year were “health computing” and 3d printing. In the health computing category, I’m talking about devices like the Fitbit (the brand was there in person) that use gadgets to help track or encourage a healthy lifestyle.

There were 3d printers, including a MakerBot, in lots of corners and it was simply staggering to see what people could make with them. There should be no doubt in your mind just how disruptive 3d printing could become if the tech becomes commonplace in households.

On the household note, it’s worth noting that there is also plenty of kitchen and garden “tech” stands this year. These range from cleverly designed garden shears that let you cut through a branch in just one snip, to impressive whisks with trademarked whisk heads and to super expensive luxury shower units that would be at peace in the home of tomorrow.

Microsoft was a sponsor. They had a huge stand to push both Windows 8 and Windows Phone. They’ll be pleased to see it was busy all of the time. People need to play with Windows Phone to really understand it.

One of my favourite stands was Game Legends who had some fantastic gamer models and their range of plushy Minecraft Creepers seemed to be a top seller.

The big-ticket item this year had to be the TV sets. Last year’s wave of 3d TVs have retreated, tail between their legs and although there were some 3d TVs this year there was just a few and they did not have pride of place. The TV scene was more interesting than that and had three courts battling for your attention; large and flat TVs, especially with the impressive resolution, connected TVs and TVs that responded to gesture commands.

Samsung had a security guard protected booth that was generally busy with people trying to wave at TVs. Despite the crowd, the TVs seemed quite capable of working out who was trying to test them and seemed to respond well to commands.

Overall, well organised, busy without being frantic and it does feel that they are maturing into a more organised exhibition and that encourages me towards booking again for next year.

Review of the Gadget Show Live 2013 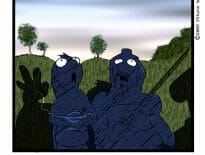 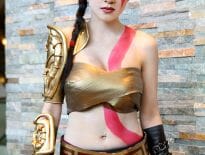