I say this is a review of The Gadget Show Live in 2011 but be informed that this is the same Gadget Show Live that Jason Bradbury appears, on stage, in a mankini. Everything else seems to pale in significance!

First off; there are two parts to The Gadget Show Live out in the National Exhibition Centre in Birmingham. There’s the expo. There’s also the stage show from Jason Bradbury, Suzi Perry, Jon Bentley, Ortis Deley and Pollyanna Woodward that appears in the Super Theatre. By far and away the best bit is the stage show. That’s sold out for this year.

I really enjoyed the stage show. It begins with a bang and the crew flying onto the stage. I understand that The Gadget Show is family entertainment but think twice about bringing babies in. I’ve seen what happens. They don’t always react quietly to indoor fireworks, flamethrowers and explosions.

On the other hand, I react well to indoor fireworks, flamethrowers and explosions. Keep your phone handy and get ready to text quickly. It’s a good way to win prizes. It’s also a good way to find yourself up on the stage with Suzi, her tight leather suit and the others. One of the aspects of the show that makes the experience successful is that the team appropriately shepherd the few who make it up into prizeland and ensure there are no awkward hiccups.

The best way to describe the stage show without getting heavy on the spoilers – there are tanks, robots, lasers, martial arts and devices that react to flash photograph going off from the audience – is that it has the same intensity and camaraderie of the TV show.

So, what about the expo experience? It was certainly loud and busy. There is tech everywhere – especially games and TV screens. I quite enjoyed the atmosphere.

I wasn’t expecting the ability to pick up modern tech on the cheap. I have a combo Asus set from eBuyer.com that’s not actually available from their website.

I was expecting a little more future tech though. I suppose the future tech were the wash of 3D TVs. The queue to see the 3DS was very long but I think most Geek Native readers will be happy with their exposure to the device by now and not prepared to queue for ages if they’ve not already had a shot. I’m not against the big stands from some of the high street retailers but they weren’t why I came and didn’t really contribute much.

A surprise vendor – sponsor, in fact – was Brasso. Remember Brasso? Barely? Might have had an awkward tin of the stuff on a shelf somewhere in your parents’ house beside some dirty rags? It was once used to clean brass. Hence the name. They have a gadget cleaning cream product out now. By the end of the expo I was a little fed up of their marketing tactic of returning to a household reminiscent of yesteryear except with gadgets.

Lunch can be a challenge. It always is for large and popular expos. I’d risk eating a little early to do without a queue or exploring around the back of the F1 simulator ride to discover a little off-the-map curry serving café if I was going back later on this week.

One thing that struck me was the swag bagging. Many booths hand out swag freebies to lure people over or thank them for buying stuff. I saw so many people just helping themselves to freebies, without even stopping, and moving on. Tacky, tacky.

Here’s the summary; The Gadget Show Live is a full day out – it’s a long day out, your feet will hurt, but it the expo can happily fill the day. It’s far better to include the stage show.

The only thing there was bloody 3D TV’s! this isnt future technology, its out get over it. bring us something new!

I think that’s a fair point. I know my better half was disappointed by the lack of future tech. I wonder how “future tech” the huge audience/visitors were though… hardly any Foursquare check-ins whereas we should have been a sure in for a Super Swarm badge. During the stage show there wasn’t a single Twitter user among the eight invited up to join the crew. 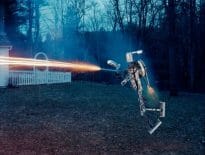