You are here: Home / TV / Online Shows / J. Michael Straczynski partners with the Wachowskis for Sense8

Netflix continues its clever strategy of creating its own content and has branched out to sci-fi. The company has appointed J. Michael Straczynski (Babylon 5, Jeremiah) with the Wachowskis (The Matrix trilogy) for a sci-fi series called Sense8.

It’ll be a part 10 series described as “a gripping global tale of minds linked and souls hunted” and will be told it will be very much in the Wachowski’s storytelling style.

In an article in Deadline, the Wachowskis’ said;

“We’re excited to work with Netflix and Georgeville Television on this project, and we’ve wanted to work with Joe Straczynski for years, chiefly due to the fact his name is harder to pronounce than ours, but also because we share a love of genre and all things nerdy.”

J. Michael Straczynski partners with the Wachowskis for Sense8

TV The Whispermen and the Clara Oswald mystery 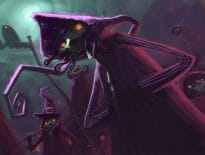