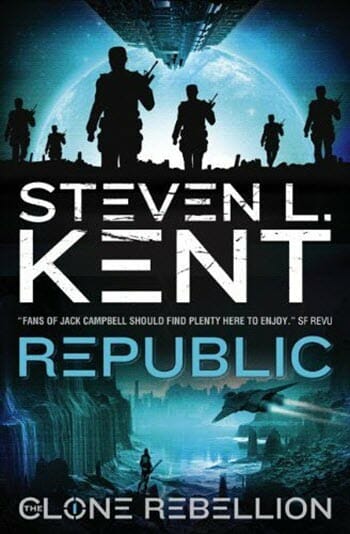 I picked up Clone Rebellion: Republic and instantly thought “Star Wars. The Clone Wars”. How could I not? This is a military sci-fi thriller in which a repressive Republic rule the known universe through an army of cloned marines.

That’s when the comparisons stop. Steven L. Kent’s sci-fi series is far more likely to appeal to sci-fi military fans than those of space operas like Star Wars. Rather than being a clone itself; Republic starts the series by taking a different spin on everything.

This is not a series about brave captains doing their best in challenging circumstances and being heroic in front of their men. This is a story that follows a galactic civil war from the point of view of the grunts – of the marines.

In one scene we don’t get much of the glorious space battle overhead. We follow the clone marines in a grubby, awkward, and almost pointless ground march.

The military isn’t entirely made up of clones. Clones tend to obey orders first and think later. Our hero grew up in an orphanage, effectively a marine training school, surrounded by clones but is not like them. Private First-class Wayson Harris thinks first and acts second and that’s always held him back as a Marine.

There’s Plato in this book. The ancient Greek talked about having a civilisation of three tiers; the politicians, the citizens and the warrior class. Plato feared the warrior class and conducted lies to keep them in check. In the future where spaceships can broadcast lightyears in just seconds lies are not necessary. Clones are programmed not to see themselves as a clone. Everyone else in their platoon might be a clone but they’re not. Should a Clone ever come to understand he’s a clone then a chemical reaction, hardwired into his biology, kicks in and kills the marine.

There’s a book here rather than the depressing story of a marine sent to die alongside hundreds of thousands of disposable clones because Wayson has a mysterious benefactor.

These ingredients may seem simple but Kent weaves them together to create a fantastic story. Our marine hero only hears teasing snippets of conversations while standing guard outside officers in conferences. He discovers whether the overall battle is going well or poorly only as the readers do and often without knowing the bigger picture. I suppose at times it can be a slightly frustrating way to find out what’s going on but most of the time it’s exciting, dramatic and encourages frantic page turning.

Gamers might be familiar with this form of storytelling and it’s worth keeping in mind that Steven L. Kent has written for EA as well as papers like USA Today, The Japan Times and The Chicago Tribune.

It’s pleasing to note that Kent has written for The Japan Times. In this future mankind has become, effectively, homogenous as racial and cultural distinctions washed away. The ruling group, the Unified Authority, feels a lot like a quasi- fascist United States of America. It’s the UA rather than the USA. One plot strand features a planet with an unusually high number of descendants from Japanese explorers and colonisers .

This British reader gets no sense that the Clone Rebellion series glorifies the US and demonises the Japanese. In fact, that’s very far from the truth. This may be an impressive military sci-fi story but it’s steeped with reflection on humanity, religion and philosophy. Do clones have souls?

I really enjoyed Clone Rebellion: Republic. I suspect you will to. 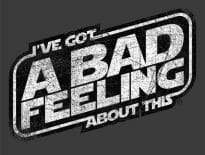 Geek Stuff I’ve got a bad feeling about this… 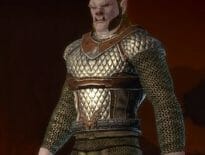